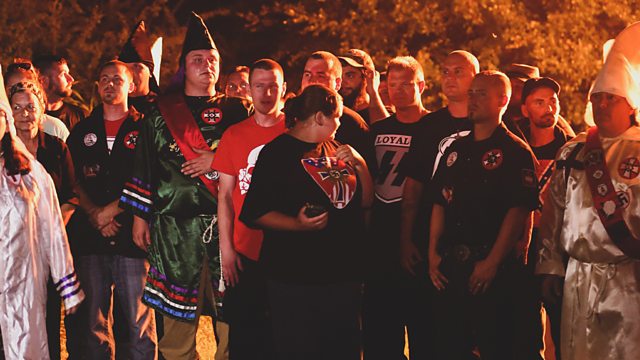 KKK: The Fight for White Supremacy

America's most infamous supremacist group - the Ku Klux Klan - says they are in the midst of a revival, with a surge in membership and cross burnings across the Deep South.

Film-maker Dan Murdoch meets the leaders of the Loyal White Knights, who claim to be the largest Klan chapter, to witness first-hand their secretive rituals and hear about why their members choose to wear the infamous hood.

The Klan says they are not violent. But when a 21-year-old white man walks into a church in Charleston, South Carolina, and massacres nine black worshippers saying he wants to start a race war, the danger of the white supremacist ideology becomes a terrifying reality.

The film follows events as protests erupt and Black Power groups, including the New Black Panthers, take to the streets to preach their own agenda of black supremacy. And when the Ku Klux Klan and the New Black Panthers organise rival protests in the South Carolina capital, the two extreme visions of America violently come face to face.