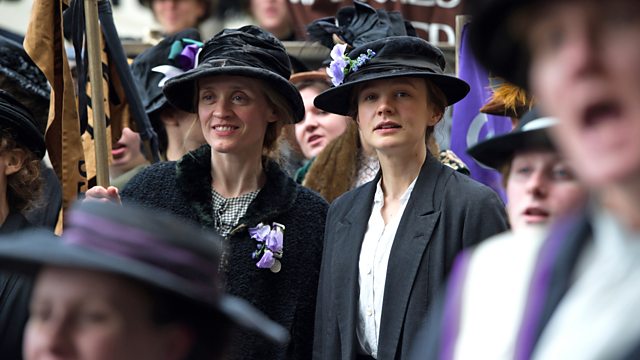 Suffragette screenwriter Abi Morgan and the fight for women's votes, Hollywood actress Geena Davis on Thelma and Louise and inequality on screen, and the Conservatives and women.

Suffragette - the film's screen writer, Abi Morgan, and its historical advisor, Professor Krista Cowman, on bringing the fight for women's right to vote powerfully to life on screen.

Plus, Hollywood actress Geena Davis on her mission to address gender inequality in film and TV, and her role in that ultimate female road-trip movie, Thelma & Louise.

How well does the Conservative party connect with working women? As this year's party conference continues, Isabel Hardman of The Spectator and Rosie Campbell of Birkbeck, University of London, consider the evidence.

And the suffragettes' importance today and their modern day torchbearers: Sam Smethers of the Fawcett Society and Hillary Margolis of Human Rights Watch discuss.

BBC iWonder offers further information and details on the Suffragettes.

Beyond suffrage: How did women battle into Parliament?