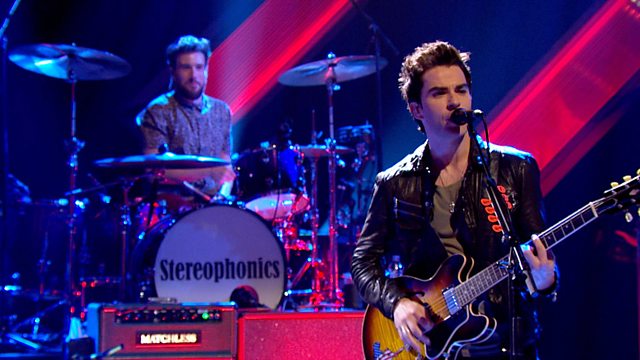 Joining Jools on the second show of the series are Elephant and Castle's finest, The Maccabees, who'll be performing tracks from their recent no 1 and fourth studio album Marks to Prove It, and renowned British guitarist and songwriter Richard Thompson will be in the studio along with his Electric Trio to play tunes from new album Still, produced by Wilco's Jeff Tweedy. Former Moloko front-woman Roisin Murphy brings her extraordinary blend of showbiz and the avant-garde to the electro disco of her first album in 7 years, Hairless Toys, Welsh rockers and show stalwarts Stereophonics return to the fray with songs from their ninth studio album Keep the Village Alive. South London singer-songwriter Izzy Bizu will make her UK TV debut with a sound that blends her Ethiopian roots with jazz influences from Etta James to Amy Winehouse. Also from Nottingham, Liam Bailey, who collaborated with hit electronic duo Chase & Status on their 2011 smash Blind Faith, makes his Later debut with a track from his recently released solo album Definitely Now.