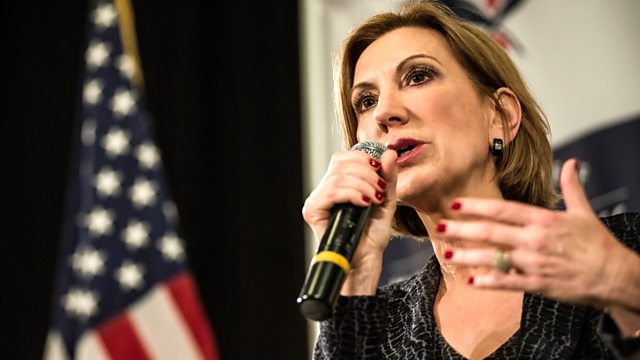 Finding out more about Carly Fiorina who is vying for the Republican nomination to run for US president. Plus what is it like being a junior doctor in the NHS?

Carly Fiorina is the only woman vying for the Republican nomination for next year's US Presidential election. We find out more about the woman who would be President from journalist and writer, Beth Gardiner and Republican Commentator, Stacy Hilliard.

We hear from Allegra Stratton, Newsnight's Political Editor who's at the Labour Party Conference. Will Jeremy Corbyn live up to his promise to bring about gender equality?

Plus 150 years after Elizabeth Garett Anderson became the first female in Britain to qualify as a doctor we talk to three junior doctors working in the NHS today.

And we'll be discussing how men and women disclose their personal experiences and feelings online with academic Rachel Sykes and journalist Ally Fogg - is it brave or all just too much?