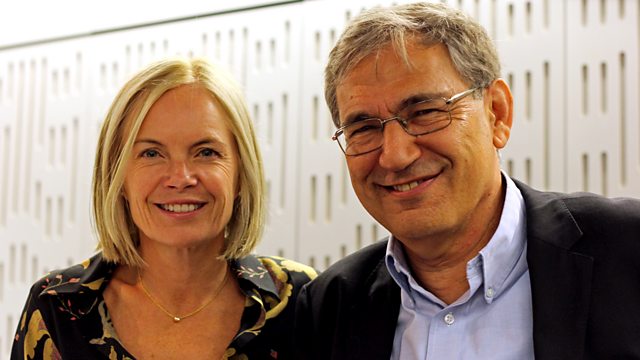 Orhan Pamuk on A Strangeness in My Mind

The Nobel Prize-winning author Orhan Pamuk talks to Mariella about his new novel A Strangeness in My Mind, the story of boza seller Mevlut over 40 years in Istanbul.

The Nobel Prize winning author Orhan Pamuk talks to Mariella about his new novel A Strangeness in My Mind. Mevlut, a boy from the countryside, arrives in the city in 1969 and for forty years wanders the streets of Istanbul selling his boza (a local drink), yoghurt and rice. One of life's observers, he watches the inhabitants as they transform under political movements and modernity, while the fabric of the city itself is ever evolving.

Vendela Vida's new novel The Diver's Clothes Lie Empty is all written in the second person, an unusual choice for a novel, as they are usually in the first or third person. Vendela and writer Richard Beard discuss the secrets of finding and sustaining the right narrative voice.

And critic Erica Wagner joins Mariella to reveal why a six word story most frequently attributed to Ernest Hemingway may not be by him at all.

Bill Clegg on Did You Ever Have a Family