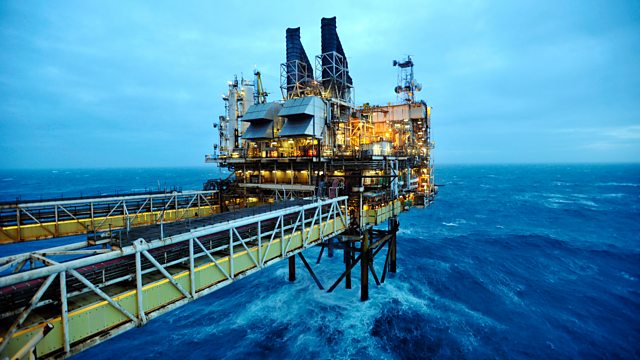 Oil: A Crude History of Britain
Episode 2 of 3

From stubborn factional rows over spending to tragic loss of life in disasters at sea, James Naughtie continues his exploration of how North Sea oil wealth changed Britain.

In Norway, and in Shetland, funds drawing a tax on North Sea oil wealth have built up massive reserves of public money. Calls for such an Oil Fund for the UK have been ignored down the years, dismissed as impractical or undesirable.

Instead, North Sea oil, once held up as a transformational force in British politics, came to be used in the day-to-day expenditure of government. Critics argued that what could have been used to upgrade Britain's infrastructure was paying benefits cheques to Thatcher's 3-million unemployed.

Elsewhere, the SNPs "It's Scotland's Oil" campaign had brought the party to the brink of a political breakthrough. In episode 2 of Oil: A Crude History of Britain, James Naughtie explores all these strands with those who were there at the time, including former Chancellor and Energy Secretary Nigel, now Lord, Lawson.

Jim also recalls the tragic loss of 167 lives on Piper Alpha in July 1988. He hears from one of Red Adair's globe-trotting specialist firefighters, who spent weeks tackling what is still the deadliest ever oil industry disaster.