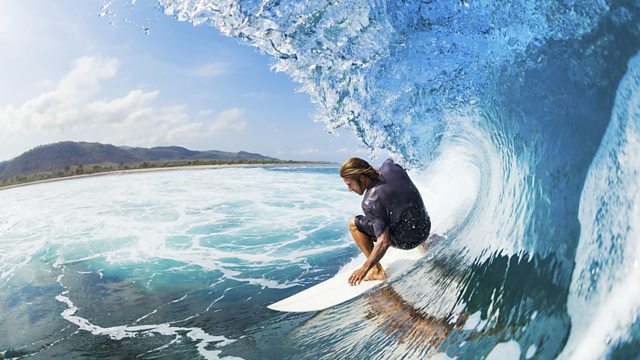 From a disappointing heap of sand bags in Dorset to a breakthrough break in the Spanish mountains, Helen Scales seeks the perfect artificial surf ride.

Can we make better surfing waves than the wild ocean?

Marine biologist and writer Helen Scales loves surfing. She also describes it as an extreme form of delayed gratification, especially around the British coast. Nature does not make great surfing waves to order. Waiting for the perfect wave demands patience, a warm wet suit and a cool head (if somebody jumps the queue and steals your ride).

Her quest takes her to Boscombe, a seaside neighbourhood of Bournemouth. The council spent £3.2 million on an artificial surf reef, which was designed to boost the wave height and lengthen the ride duration of the surf there. Boscombe was already a spot known to the surfing folk of the Dorset coast but the artificial reef was going to make Boscombe a national surf destination. Unfortunately in 2010, the underwater construction (covering the area of a football field) failed to do the job and the surfing is, if anything, now worse where the reef lies. Helen talks to the surfing scientist who diagnosed the reef's ills and to local surfers for their take on the Boscombe reef. The final verdict is not as damning as you might think.

But Helen has to travel to the Basque Country in Spain to find what she's been looking for. She has the most exciting surf ride of her life in a man-made lagoon, the Wavegarden, in the foothills of the Cantabrian mountains, miles from the ocean. Over the last decade a company formed of surfing engineers has invented a machine which summons up two sizes of perfect surf waves every minute.