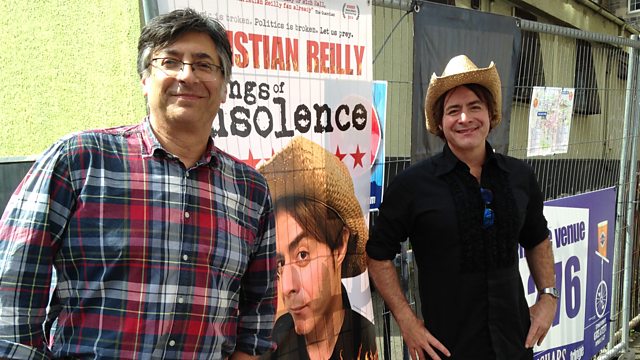 The Life of Reilly

Lives in a Landscape Series 20

For every stand-up comedian that's a household name, there are dozens of hard-working, funny, committed comedians who haven't quite broken through into the national consciousness.

Christian Reilly is a musical stand-up, a wandering minstrel, whose comedy material is delivered through song. He's a popular and successful act who's in great demand on the comedy-club circuit. His diary is packed: Some weeks he'll do two gigs in one night, in two different cities. It's an exhausting schedule. His year, along with so many others, reaches its peak at the Edinburgh festival in August.

In this week's Lives in a Landscape Alan Dein hears Christian's story and travels with him to gigs in Manchester, Liverpool and, ultimately, Edinburgh. From behind-the-scenes at comedy venues, to the share-house Christian rents for a month in Edinburgh with fellow comedians, Alan discovers what motivates Christian, what his ambitions are, and whether he believes he can achieve them.