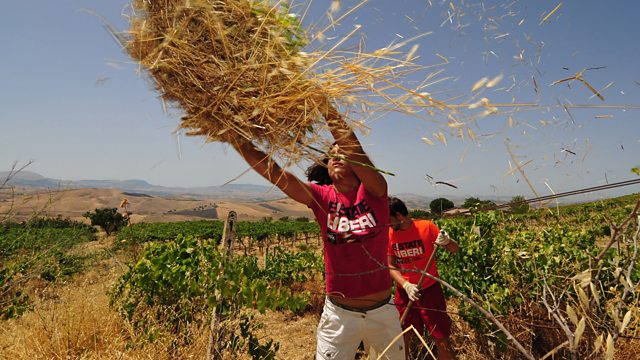 Dan Saladino finds out how farms confiscated from Sicily's mafia are providing food and wine, helping to fight crime and providing a future for a new generation on the island.

Dan Saladino finds out how farms confiscated from Sicily's mafia are providing food and wine, helping to fight crime and providing a future for a new generation on the island.

The project, a not for profit farming operation called "Libera Terra" (which translates as "Free Land"), was made possible by an Italian member of Parliament killed by the mafia in 1982, Pio La Torre. He was a Sicilian and communist who believed the best way of taking on Cosa Nostra was by seizing its assets, including its farm land.
Decades later that law is the way in which thousands of acres of citrus groves, wheat fields and vineyards have been placed in the hands of farming co-operatives. Libera Terra is the main organisation helping to turn this seized land into a food and wine business, create jobs and give young Sicilians a way of improving the island's future.

As John Dickie, Professor of Italian Studies at University College London, and author of Cosa Nostra: A History of the Sicilian Mafia, food and agricultural provided the conditions necessary for the mafia's birth in 19th century Sicily.

By the 1860's the lemon groves around Palermo were among the most profitable agricultural land in Europe, that combined with the weak political and legal framework in place after the unification of Italy, provided the conditions for what became the world's most successful criminal organisation.

In the 1940's, when efforts were made to instigate land reform and give more access to farmland to Sicily's peasants, the mafia would often intervene and exert its control over this valuable resource. Dozens of peasant leaders and trade unionists were killed in the years following the second world war simply because they tried to implement these new laws.

It's this backdrop that gives the Libera Terra project added significance, but it's more than just a noble cause. As Italian wine expert and writer for www.jancisRobinson.com Walter Speller explains, some of the confiscated land is in territory that has the perfect conditions for excellent wines. Land seized from the former "boss of all bosses" Toto Rinna, is now producing excellent Nero d'Avola wine that also tell a powerful story of Sicily and its fight against the mafia.

Dan also visits people farming this land despite experience of mafia intimidation in the past, young farmers who say they want to build a future in Sicily free from the influence of organised crime.