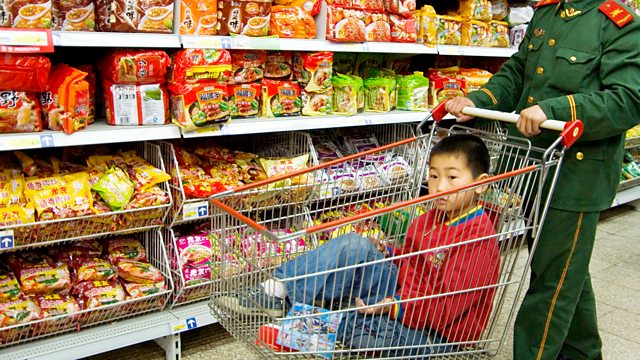 Timandra Harkness and Leo Johnson taste some strange foods of the future as they investigate how technology and a rising global population might transform what people eat.

Presenters Timandra Harkness and Leo Johnson taste some strange foods of the future, as they investigate how technology and a rising global population might transform what we eat.

With a predicted two billion extra mouths to feed by 2050 and a rapidly rising obesity problem in many richer countries, the world faces a 21st century food crisis which combines the threats of starvation and ill health from over-eating at the same time.

FutureProofing examines possible responses to these twin problems: change in the way food is produced, and change in the way we think about food and its place in our lives, could significantly alter what we eat in the decades to come. Visiting Italy, the programme finds what solutions are on offer at the huge Expo 2015, as countries from across the world present their ideas for the future of food.

See all clips from Food (2)

The Future of Food

There is a knock on the door. Timandra and I are in the studio, arguing over the Future of Food. It is Sam Francis, the ferociously bright BBC researcher, moving slowly towards me with a white Styrofoam cup. There is something about the way he is carrying this cup. A la urine specimen.  Sam places it on the table in front of me and I pull off the lid. Inside the cup, eyeballing me, there is a gruel-coloured liquid with a yellow slick of oil round the rim. I have what in Greek tragedy is called the anagnoresis, the moment of tragic recognition. It is Soylent, the “food substitute” (just stir up the chemical ingredients with some water and there’s your nutrient-rich meal to share with all your friends.). I know what this cup means. For the last ten minutes I have been going through a whole shtick with Timandra about the valuable role technologies like Soylent and in vitro meat  (or “Tubesteak”, next time you’re in a restaurant) can play in the future of food; slashing carbon, slashing water use, saving livestock from slaughter, liberating farmers - women especially - from the back-breaking work of agriculture. Now I’ve got to walk the walk. I’ve got to drink it. I man up. Ready Brek, is my first thought. I could do this. By sip three I am flagging. I down the rest in a gulp and look up at the ceiling.  Then Sam hands over a second cup. “This one is Queal”, he says. “Just as good.” I wake up at four in the morning, my stomach in a state of unrest, bordering on civil war. And I have a thought.

Food, explained the anthropologist Claude Lévi-Strauss, is culture. It’s food that reveals our culture’s myths and governing assumptions. After centuries dominated by the task of taming and industrializing nature for our food, maybe a new myth is emerging, a techno-fantasy that we can instead bypass the ecosystem for food, not industrialising nature but synthetically recreating and replacing it. There is only one thing, I realize at four a.m., that this myth doesn’t take into account. We are not the boss. We can maybe bypass the microbes when it comes to making food, but it’s the bugs, 90% of the cells of our body, that call the shots when it comes to tasting it. The stomach, I suddenly see, as the skies lighten, is a democracy - a parliament of microbes that vote on the food proposals of the esophagus. And when they don’t like what’s on offer, it’s the whole body politic that suffers.