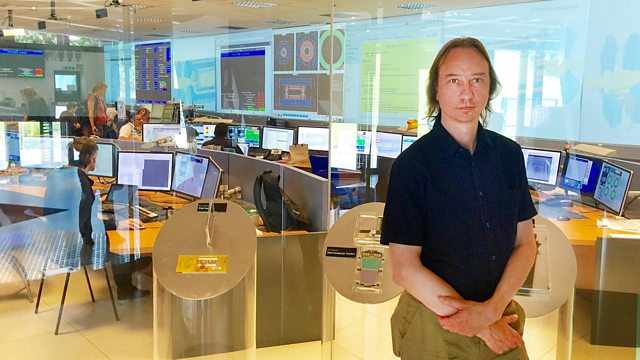 From Enlightenment to Entanglement

Science writer Stuart Clark explores the relationship between scientists and computers. He asks whether our reliance on computers in research is becoming an obstacle to progress.

Astrophysicist and science writer Dr Stuart Clark asks whether our increasing reliance on computers in scientific research is becoming an obstacle to progress.

Are we moving from the Enlightenment - when the scientist demystified the world, to the Entanglement where the scientist ends up mystified?

At CERN, Stuart meets Physicist Paul Laycock who reveals the tsunami of data that the Large Hadron Collider produces every second. In order to stay afloat, Paul and his team apply the tried and tested scientific method, using hypotheses and theory to guide them through petabytes of raw physics data.

We visit a genome sequencing lab where advances in computer power and sequencing technology are making it possible to collect genomic data faster than ever. Some critics argue that we are gorging on data, collecting more information than we can hope to analyse.

Stuart peers through a mass of wires to gaze at a powerful computer, part of the Human Brain Project, which plans to create a fully working computer simulation of the human brain. Many neurologists argue that the project have a misplaced faith in the power of computers, having done away with the Enlightenment principles of the scientific method. Those involved respond by stating that theirs is a fundamentally new way of doing science.

Finally, Stuart hears from super computer inventor Danny Hillis who explains that we are rapidly losing the ability to understand how our computers actually work. Once programmed to act as reliable slaves, computers now exhibit unpredictable emergent behaviour. As a result, Hillis argues, the role of scientist is changing as we enter a new age of complexity - the Entanglement.