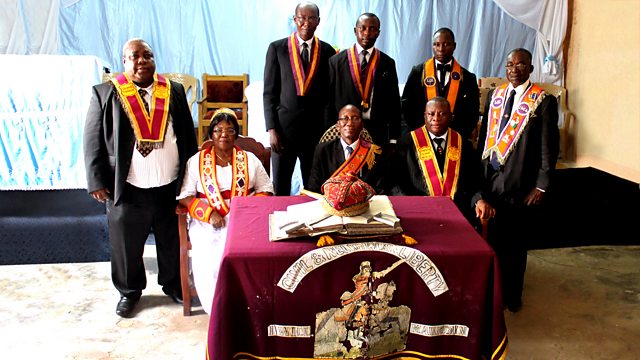 Orangemen on the Equator

As the organisation considers its future in its Northern Ireland heartland, journalist Chris Page journeys to West Africa to meet members of the Ghanaian Orange Order.

Founded 220 years ago, the Orange Order is a Protestant organisation which, its members say, stands for civil liberties, fraternity and faith. However in the divided society of Northern Ireland it is rarely out of the news. Many Irish Nationalists and Republicans view it as an anti-Catholic, triumphalist organisation and disputes over some contentious Orange parades have generated headlines around the world.

What is less well known is that in a tropical land three thousand miles away, there are Orange lodges made up of African men and women. Members of the Orange Order in Ghana share the same emblems and follow the same rituals as their brethren in Northern Ireland. While there may not be sectarian conflict in their homeland, the Orangemen on the Equator feel they too are misrepresented and misunderstood.

Journalist Chris Page travels to West Africa to find out how the Orange Order took root there. Comparing the African brand of Orangeism to that found in his native Northern Ireland, he peers into the soul of an organisation which has been characterised by its ability to survive. While members in Ulster say they have been demonised by Irish Nationalists opposed to their Unionism, their brethren in Ghana describe their challenges in the face of prejudice from churches and wider society.

From post-colonial Ghana to post-conflict Northern Ireland, Chris asks what the true essence of this often controversial fraternity really is - and what these two contrasting branches of the Orange Order can learn from each other as they consider their futures.