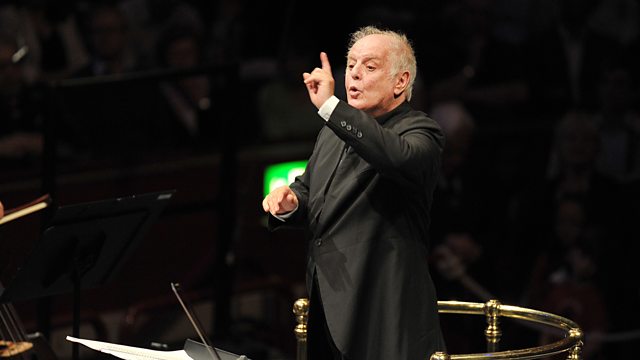 A Prom in which Daniel Barenboim conducts the West-Eastern Divan Orchestra concludes with a performance of Tchaikovsky's Symphony No 4 in F minor, Op 36.

Live at the BBC Proms: Daniel Barenboim conducts the West-Eastern Divan Orchestra in a Beethoven concerto and highly contrasting symphonies by the young Schoenberg and Tchaikovsky

There's a second chance to hear this Prom on Tuesday 1 September at 2pm.

Daniel Barenboim returns to the Proms, this time as both conductor and soloist, taking the piano part in Beethoven's Triple Concerto. Schoenberg's Chamber Symphony startled audiences with its ruthless concision - a reaction against the excesses of the late-Romantics. But excess gets the last word, in Tchaikovsky's Fourth Symphony, the musical expression of some of its composer's most troubled and heartfelt emotions.