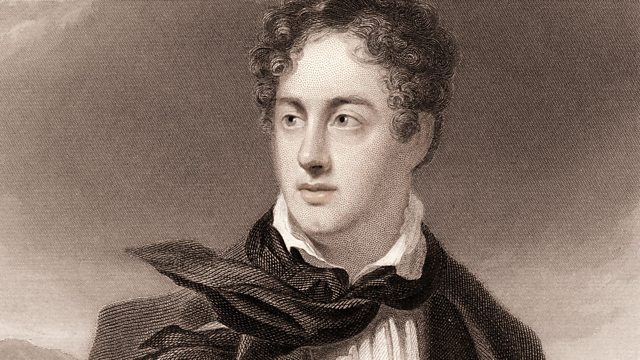 Necessary to My Happiness

Poet Michael Symmons Roberts asks why Byron's illegitimate daughter Allegra, who was only five when she died in an Italian convent, came to haunt her father's imagination.

The poet Michael Symmons Roberts tells the story of Lord Byron's illegitimate daughter Allegra, who was only five when she died in an Italian convent. Michael goes to Ravenna to find out how Byron came to abandon her, and how she came to haunt his imagination (and that of fellow Romantic Percy Bysshe Shelley).

Through visiting the Palazzo Guiccioli in Ravenna, where Byron lived for a time, and the convent at Bagnacavallo where Allegra died, Michael discovers evidence for her as a spirited little girl, who wrote heartbreaking letters to her father, pleading with him to visit her.

In this documentary, Allegra gets her own voice at last. . .

The Palazzo Guiccioli where Byron lived with his daughter Allegra in Ravenna in Italy is one of the locations Michael Symmons Roberts visits, in the hope that it will help him understand their relationship better, and to get a sense of what Byron's life was like in Ravenna. It is being turned into a dedicated Byron Museum.

Letter from Allegra Byron to her father Lord Byron

Here you can see one of the poignant letters that little Allegra wrote from the convent where she was placed by Byron - from an exhibition at the Bodleian LIbrary in Oxford.

Michael Symmons Roberts visits this library to see some of the Byronic artefacts that the Countess Teresa Guiccioli (Byron's lover ) held most dear. It also holds the original text of her account of Byron's life in Italy.