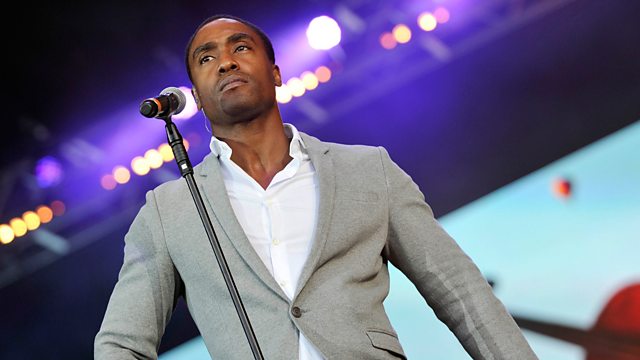 Simon Webbe is currently playing the part of the Big Bad Wolf in the Three Little Pigs but is perhaps best known for being a quarter of the boy band Blue. Simon made his theatre debut in Sister Act at the London Palladium and has also been a contestant on Strictly Come Dancing.
Simon tells Kate Silverton and Richard Coles about learning discipline and his hopes for breaking Hollywood.
Simon is at the Palace Theatre, Cambridge Circus, London until the 6th September

Annie Humphries is a loyal Saturday Live listener who emailed us with her story. Annie was diagnosed with throat cancer in 2006 and in 2009 had her larynx surgically removed. But that didn't stop Annie. She's a member of a Choir of Laryngectomies conducted by Dr Thomas Moors at Addenbrookes Hospital in Cambridge.

Liz Cowley is known as the Gardening Poet. Now approaching her seventieth year she talks about a love of gardening in her slippers and being published late in life. Her book Gardening in Slippers, Poems for Garden Lovers is published by Gibson Square Books August 2015

Mathew Clayton is the author of Lundy, Rockall, Dogger, Fair Isle - a romp around the islands of Great Britain. Mathew's love of island life came from his Grandparents who met while working for the monks on Caldey Island off South Wales. Published by Ebury Press

As usual JP Devlin will be in the studio making mischief and looking forward to hearing your stories.

Comedian Bridget Christie inherited Have you Ever Seen the Rain by Creedence Clearwater Revival from her late mother and passes on the theme from Steptoe and Son to her children.