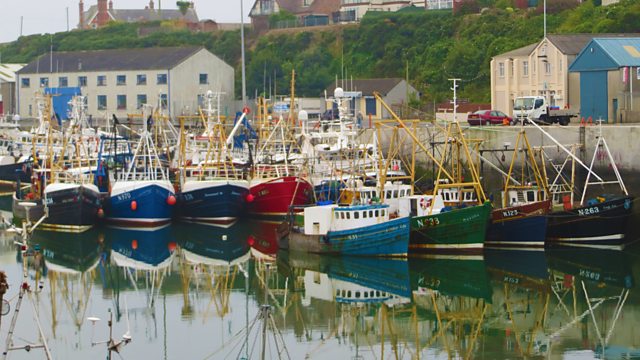 Coast investigates how the Irish Sea has shaped our island story. Nick Crane explores a seasonal phenomenon of this sea - a current called a gyre.

Nick Crane hops on a ferry across the Irish Sea and washes into Dublin on her tumultuous tides. On dry land, he explores a seasonal phenomenon of this sea - a current called a gyre. It's the lifeblood of these fish-rich waters and the perfect environment for Dublin Bay prawns to flourish. But how many prawns - or nephrops - are in the Irish Sea? Nick tries his hand at counting as he joins the scientists monitoring stocks. Continuing north, Nick also delves into the many eccentric schemes to connect our isles, but is it really possible to drain the Irish Sea?

A decade on from his first visit, Mark Horton is back at Maryport, where archaeologists have discovered two Roman temples and one of the earliest Christian churches in Britain. Did a place that was the focus of Roman pagan belief become a Christian powerhouse?

Tessa Dunlop uncovers a story that could have come straight from the pages of a spy novel! How did one small yacht change the course of British and Irish history? Tess tells a story of gun smuggling, recently uncovered prisoner graffiti and the battle for an independent Ireland.

Cassie Newland and Miranda Krestovnikoff join forces - on land and underwater - to investigate a shipwreck mystery to rival the Titanic's. RMS Tayleur was heralded as the fastest, safest, most advanced vessel of her day. But this iron-hulled ship sank on her maiden voyage with horrific loss of life. Our intrepid pairing uncovers why she sank, why she veered so drastically off course, and why so many women and children died compared with men.

And singer-songwriter Ruth Keggin tells the story of the Irish sea god Manannan - first ruler of the Isle of Man, who is now said to reside on an underwater island.

See all clips from The Irish Sea (5)