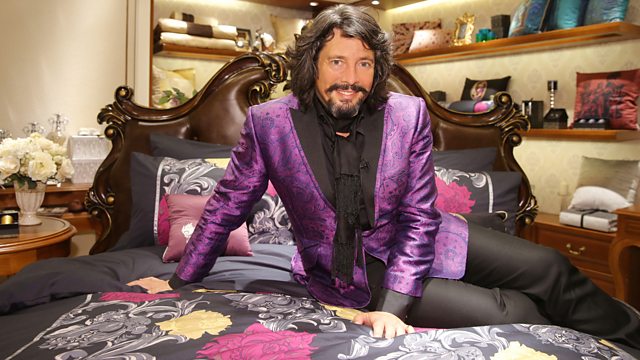 Documentary. Times are tough for Laurence Llewelyn-Bowen's current business, but he has big plans to position himself as the UK's go-to celebrity designer.

Changing Rooms made Laurence Llewelyn-Bowen a household name but it's been over ten years since it left our screens and now he designs cushions and picture frames that sell through a well-known catalogue.

Times are tough for the business. With his back against the wall in the UK, Laurence sees a glimmer of hope in the world's emerging markets. This film follows Laurence on trips to China and Mexico as he tries to launch his business internationally and take advantage of the world's newly emerging middle classes. But he is not just selling his usual chintzy wares, there is something different up his frilly sleeve - he is also branching out and designing lingerie, a totally new line that should help get his brand noticed!

With access to every meeting, business meal and PR schmooze, as well as the build-up to the launch of his business, this documentary sees Laurence position himself as the UK's go-to celebrity designer, as he is forced to dig in and work hard to break new territories and keep his business hopes alive.