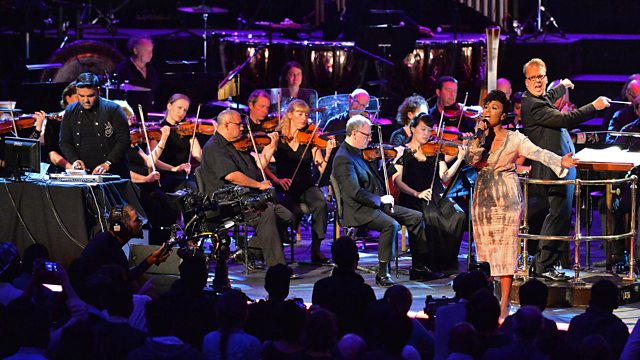 The BBC Philharmonic, Benny Dayal, Palak Muchhal, Naughty Boy and Bobby Friction feature in an Asian music Prom, with music ranging from Bollywood to the contemporary.

Live from the BBC Proms, the BBC Philharmonic is joined by Benny Dayal, Palak Muchhal, Naughty Boy and Bobby Friction.

Indian singers Benny Dayal and Palak Muchhal, together with British Asian DJ, songwriter and producer Naughty Boy, headline a Prom by the BBC Philharmonic in association with BBC Asian Network and as part of the 50th anniversary this year of Asian programmes on the BBC. The event launches a new series of Proms curated in collaboration with six BBC national radio stations - including 6 Music, Radio 1 and Radio 2 - and BBC Music. Bobby Friction presents the very best of South Asian music, from Bollywood to contemporary sounds.