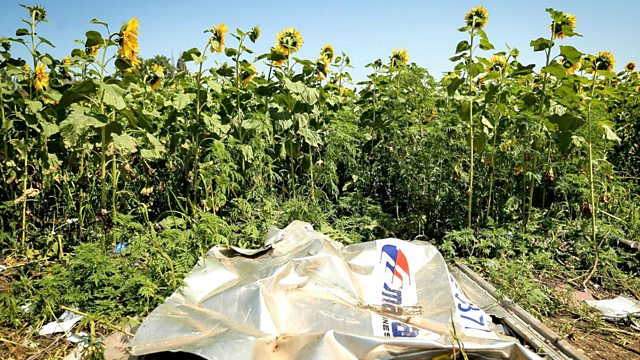 Religious news. William Crawley asks should God be kept out of politics? He also talks to punk vicar Phil Chew, and we look at 21st-century cathedral cloisters in Blackburn.

In remembrance of the Maylasian Airline flight MH17 sunflowers are growing as a living memorial to those who died. William talks to Paul McGeough, who had the idea to use sunflowers. We also speak to Thomas Schansman whose 18 year old son Quinn was killed.

A major £7 million building project has been going on to provide Blackburn Cathedral in Lancashire with its own 21st century cloisters. Kevin Bocquet reports.

William talks to Neville Kyrke-Smith, National Director of the Aid to the Church in Need UK who recently visited Northern Iraq and Syria about the plight of Christians and the rise of kidnapped priests.

In the week when Tim Farron an openly committed Christian is appointed Leader of the Liberal Democrats William asks should God be kept out of Politics? Quentin Letts & Poly Toynbee discuss.

Mark Vernon writer and Philosopher explores how ancient Greek philosophers and playwrights might have commented on the European Greek crisis today?

Trevor Barnes has been looking at the impact of work life balance of clergy and what causes them stress?

Punk rock vicar Phil Chew tells William why he takes to the stage with a mohican and a dog collar as he sings with the band 'Revisit'.

Reform Judaism in the UK has made the dramatic decision to change the traditional definition of a Jew which has been universal for the last 2,000 years. What does this mean and what impact will this have? Rabbi Jonathan Romain & Dr Yaakov Wise debate