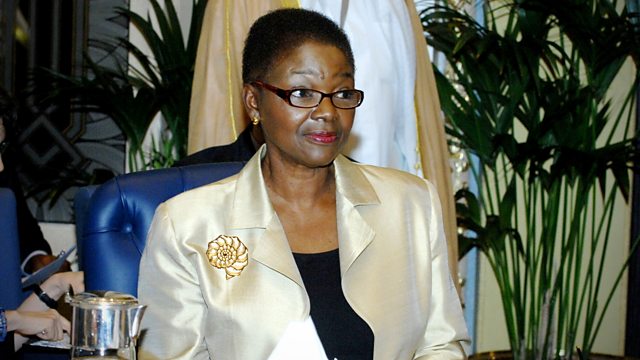 Baroness Valerie Amos on becoming the UK's first-ever female black leader of a university. She will take up her post as Director of the School of Oriental and African Studies, University of London, in September 2015.

In the next of our series retracing Sylvia Pankhurst's steps, we look at farming. Today, much of arable farming is done by machine. If there is any hands-on work, it is mostly carried out by migrant workers from Eastern Europe. Emma Barnett went to Wright's Lettuce Farm in Lancashire to help with the planting. Karen Sayer, Professor of History at Leeds Trinity talks about women and manual work.

Cathy Rentzenbrink's younger brother Matty was just 16 in 1990 when he was knocked down by a hit and run driver. He had emergency brain surgery, but was left in a persistent vegetative state for eight years, until the family sought legal permission to allow him to die. Cathy joins Jenni to talk about her memoir 'The Last Act of Love'.

Working Women: In The Steps Of Sylvia Pankhurst – Farms

In the third of our examinations into the lives of working women, Emma Barnett spends the day with the women working in the fields at Wright’s Lettuce Farm in Lancashire. When Sylvia Pankhurst wrote her ground breaking exploration into working women’s lives in 1907, she visited farms all over England and Scotland looking at the lives of women, mostly itinerant workers, who would follow the harvests around the country. Professor Karen Sayer, Countryside Historian and Visiting Fellow at the Museum of English Rural Life, part of the University of Reading, joins Jenni to talk about the lives of women farm workers today.

Cathy Rentzenbrink’s younger brother Matty was just 16 when he was knocked down by a hit and run driver, in the summer of 1990. After emergency brain surgery, he was left in a persistent vegetative state for eight years, until the family sought permission through the courts to allow him to die. Cathy has written her memoir The Last Act of Love, and joins Jenni to talk about her experiences.

The Last Act of Love: The Story of My Brother and His Sister by Cathy Rentzenbrink is published by Picador

Jenni talks to the first ever female black leader of a university in the UK, Baroness Valerie Amos, who has just taken on the role of Director of the School of Oriental and African Studies (SOAS), University of London.

The average Brit says sorry 1.9 million times in his or her lifetime. But how much more do women apologise, rather than men? Is apologising, or over-apologising, primarily a female trait? Why do women do it, and how can they stop? Comedian Viv Groskop is taking her show Say Sorry to the Lady to this year’s Edinburgh Fringe and joins Jenni to talk about saying sorry.