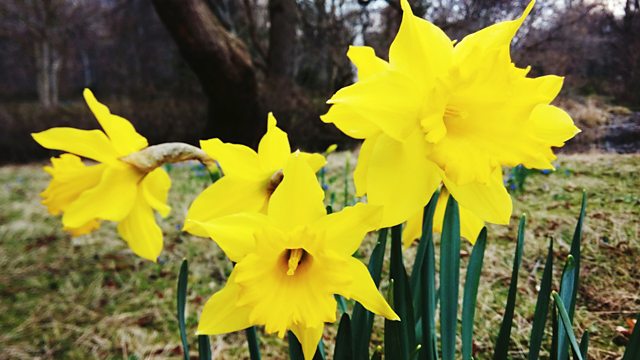 By Douglas Livingstone. The celebrations at the St David's Day festival in St Davids are the setting for a touching story of two pilgrims seeking help from the city's two saints.

A story of myth and faith set at this year's St David's Day celebrations in the city of the same name.

The legends of Welsh saints are full of sex and violence - but you can also find faith in Britain's smallest city. It might seem that St David's Day in St Davids is just full of fun and games for the children, but for two of this year's pilgrims it's a serious business as they seek help and guidance from two Welsh saints.

The writer Douglas Livingstone and director Jane Morgan have taken various "Roads" over the years - visiting an event and recording the sounds particular to it before Douglas writes a play based on their experiences.

Their first play, the Sony Award winning Road to Rocio, was about a pilgrimage in Andalusia and this year's play is also about a pilgrimage - a handful of people making their way from St. Non's Well, where St Non gave birth to David, to the cathedral in Britain's smallest city. For the children it's all about the Dragon's Parade in the city, but for many it's a profound experience and two of the pilgrims need considerable help and guidance from the Welsh saints.

A largely Welsh cast is headed by the young English actress Faye Castelow (RSC and National Theatre) and they're supported ably by the people of St. Davids themselves. It's a beautifully dramatic mix of ancient myth, dragons, adultery and faith with special recordings made on location.

If I Should Go Away