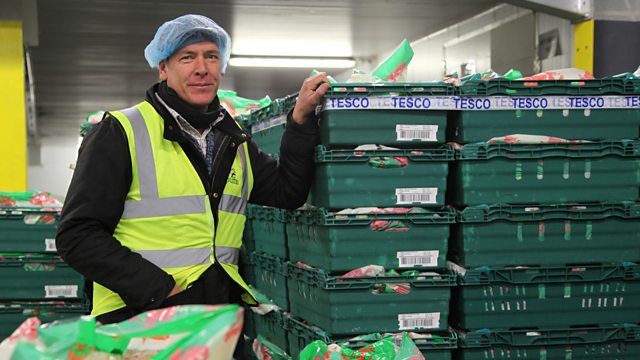 The Farmer and the Food Chain
Episode 2 of 3

Supermarkets. Love them or hate them, Wales cannot live without them. If Gareth wants to change the way Wales is fed, he must understand how they have become so successful.

Gareth has approached the five biggest supermarkets plus the two discounters in a bid to see their supply chain at first hand. After encountering difficulties in his pursuit he arranges to visit an old friend who knows more than most about how to do business with Britain's biggest retailers.

Butcher Ieuan Edwards was recently crowned the best butcher in Britain, but he has also embraced the supermarkets and has found a way to work with them. His sausage business has been a big success, producing bangers on a big scale. Gareth visits the factory to find out what it's like working with big business and even tries his hand making a sausage or two.

Elsewhere, Gareth learns that the supermarket story isn't all good news. He explores one example of the pressure they can put on their producers which has caused a stir in recent months - the price war on milk.

Finally, Gareth gets a response from one of the big retailers - the biggest of them all, Tesco. They agree to let Gareth follow one of their products from the supplier to the store, so he hits the road to follow the supermarket supply chain.

See all episodes from The Farmer and the Food Chain