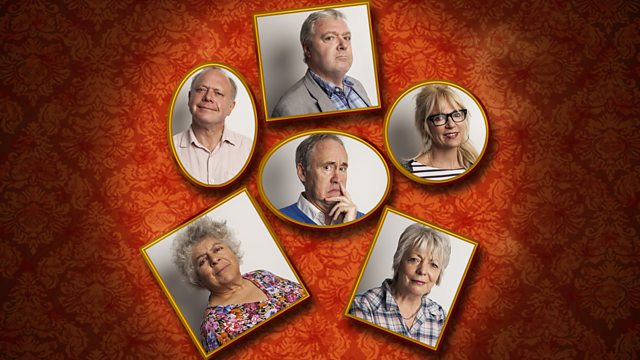 Women in Love and Men in Disgrace

A trip to see Ginny's sister is a Bohemian nightmare when Nesta asks to paint Vera nude. Stars Alison Steadman. From June 2015.

Ginny Fox has planned a trip with Vera Sackcloth-Vest to see her sister, Nesta Bell, at Charlatan House in Sussex, so that Nesta can paint Vera's portrait.

Lionel disapproves of the Bohemian lifestyle of Nesta and her husband Cliff and goes off to spend the weekend with Henry at Sizzlinghurst. Cliff is a rogue who spends half of his time away from the house living with his lover, Mrs Hutchinson. Nesta only tolerates Cliff's dalliance because there's another man living at Charlatan with whom she's really in love - Duncan Grunt. Unfortunately for Nesta, Duncan only has eyes for his homosexual lover, who also lives in the house, and whose name is Flopsy. And to top it all, Nesta's two children run up and down the garden without any clothes on.

When Ginny and Vera turn up at Charlatan House, Nesta makes an improper suggestion when she asks if she can paint Vera in the nude. Vera is shocked and wants to leave. Unable to share Vera with her sister, Ginny storms out too, and she and Vera return to Sizzlinghurst, where their mood is not lightened by the discovery of Henry and Lionel wrestling naked in front of the library fire as research for DH Lollipop's new book.

See all episodes from Gloomsbury