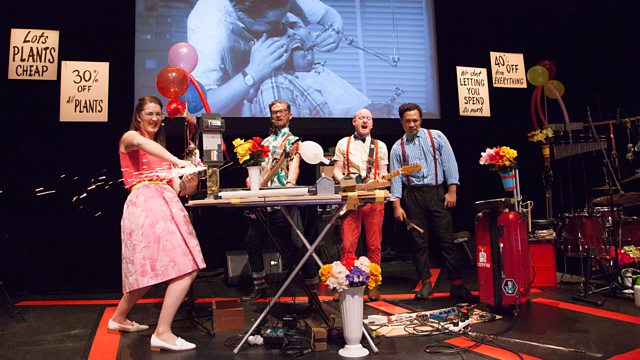 With Francine Stock. Live Live Cinema perform The Little Shop Of Horrors, a look at virtual reality use in documentaries, and how films are chosen for the Toronto Film Festival.

Live Live Cinema perform The Little Shop Of Horrors in studio. The four band members play various instruments and all the characters as well as performing the sound effects and lip-synching to the dialogue on screen. They show Francine how it's done.

Virtual Reality could well be the future of documentaries, according to film-makers Richard Nockles and Gabo Arora. Francine dons a headset and takes a virtual tour of London by crane.

The road to the Oscars for Slumdog Millionaire and The King's Speech began at the Toronto Film Festival, which is becoming increasingly important for British film-makers with their eyes on the prize. Cameron Bailey and Piers Handling are in London this week from Toronto to watch 65 films all vying to get into the festival. Only 8 will make it. They take Francine through the decision-making process.

Francine at the VR arcade at the Sheffield DocFest

If you want to watch Clouds Over Sidra yourself, you can download the app for your iPhone, Android, or Gear VR headset at www.vrse.com . (And you can even use a cardboard headset.)