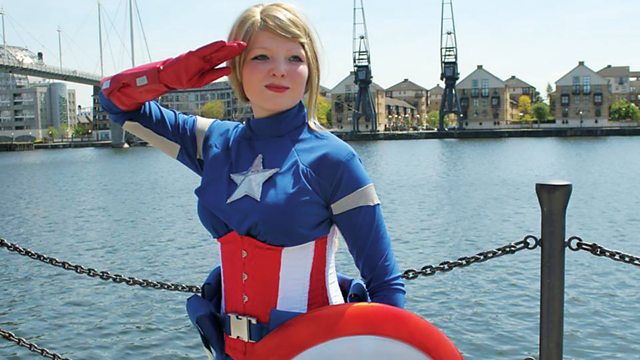 Alfie Moore is a policeman who is also a stand-up comedian. In his radio series, It's A Fair Cop, he swears his audience in and takes them through a real life scenario to see what sort of officers they'd have made. Alfie began telling jokes about life in the force as a hobby when he was working as a detective for Humberside Police in Scunthorpe. He is currently on sabbatical from the force and is about to embark on a national tour. It's A Fair Cop is broadcast on BBC Radio 4.

Lucy Saxon writes fantasy adventure novels. Her new book, The Almost King, is the first in a series of six novels set in the world of Tellus. Lucy began writing at 12 after she was diagnosed with chronic fatigue syndrome, also known as myalgic encephalomyelitis or ME. She found herself missing long periods of school which gave her the opportunity to indulge in creative writing. She wrote her first novel, Take Back The Skies, when she was 16 and signed a publishing deal at 17. The Almost King by Lucy Saxon is published by Bloomsbury.

Michael Volpe is the general manager and founder of Opera Holland Park. His autobiography, Noisy At the Wrong Times (Battles with myself), tells how he was brought up in difficult family circumstances by his Italian mother in London. In the book he acknowledges his youthful misdemeanours and credits Woolverstone Hall - the prestigious state boarding school he attended - with turning his life around. Noisy At the Wrong Times (Battles with myself) by Michael Volpe is published by Troubador Publishing. Flight by Jonathan Dove is at Opera Holland Park, London.

Richard Hudson is an artist and sculptor. His sculptures Adam and Eve are on display for the first time at Masterpiece London - the collecting fair for art, antiques and design - at the Royal Hospital Chelsea. Richard was brought up in a farming family and turned his hand to acting, property development and a stint as a nude muse before finding his vocation as a sculptor in 1995. Masterpiece London at the Royal Hospital Chelsea, London.