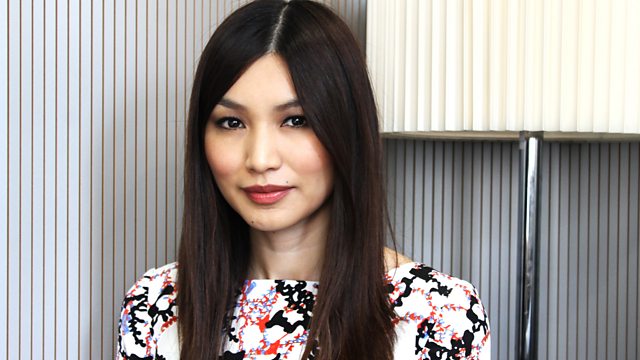 Jenni Murray talks to Gemma Chan about Humans, the WI at 100, Amanda Vickery discusses La Traviata, Ginny Mancini on Moon River, and who are the women who influence what we eat?

Gemma Chan talks about her role in the new Channel 4 series Humans.

As the Women's Institute reaches its centenary, we hear about the its remarkable history.

Amanda Vickery discusses why the women of Victorian London were so fascinated with Verdi's La Traviata.

And, Woman's Hour 2015 Power List: Influencers: We hear about the women who influence what we eat.

Marguerite Patten: A celebration of the late cookery writer and wartime broadcaster

Gemma Chan is one of the stars of the new Channel 4 series Humans which starts this weekend.  It explores what makes us human? And whether a synthetic creation can ever think and feel. She talks to Jenni about her role, equality, and why she wants to see more colour-blind casting for film and TV.

This year’s Woman’s Hour Power list will list ten women with the most influence in the United Kingdom.  Today’s discussion considers the area of food, diet and cooking – who is out there influencing the way we eat? Sheila Dillon, presenter of Radio 4’ s Food Programme and Julia Glotz, managing editor of the Grocer pool their considerable collective knowledge and consider supermarket buyers, food writers and TV cooks,  upcoming food bloggers and persuasive campaigners.

Who’s influencing the way you live your life? Woman’s Hour 2015 Power List: Influencers will identify ten women who have a huge impact on our lives, not because of their job title but because of their personal impact and their ability to influence others. Our panel of judges considers how influence operates and who has it as they compile a final ranked list to be revealed at the beginning of July. Who would you like to see on the list? You can influence the judges by getting in touch with your suggestions on email or on twitter @BBCWomansHour #whpowerlist

The Woman’s Institute is marking its centenary this year and last week more than 5000 members were at the Royal Albert Hall for a special annual meeting attended by The Queen, who is a member of Sandringham WI. The very first WI meeting was held on 16 September 1915 in Anglesey and since then the organisation has grown to become the largest women’s voluntary organisation in the UK with more than 212,000 members. It was first established to educate rural women and get them involved in growing and preserving food to help increase the supply of food to a war-torn Britain. But its aims have since widened to include campaigns on issues that are important to women on a national and international level. Jenni is joined by the chair of NFWI, Janice Langley, to talk about its key achievements and how the organisation has modernised itself and shed its ‘jam-making’ image to become a force for change on matters such as breast screening, FGM, equal pay and increasing the number of midwives.

La Traviata is one of the most popular operas, its arias instantly recognisable and a production staple for opera houses across the world. Yet at its London premiere in 1856, La Traviata was denounced for bringing ‘the poetry of the brothel’ to the stage and unleashing uncomfortable truths upon Victorian society. A new programme for BBC 2, ‘La Traviata: Love, Death and Divas’ presented by Amanda Vickery and Tom Service explores the opera and its origins. Amanda Vickery Professor in Early Modern History at Queen Mary University of London joins Jenni to discuss.

The iconic song ‘Moon River’, composed by Henry Mancini and written by Johnny Mercer was made famous by Audrey Hepburn in the 1961 film ‘Breakfast at Tiffany’s’. Despite nearly being dropped from the film it went on to win them an Oscar for best original song. Much of the film score was never written down during the film’s editing process but now an original demo has been released to the BBC. Audiences will also be able to hear Monica Mancini perform her father’s song at ‘Breakfast at Tiffany’s Live’ at the Royal Albert Hall. Jenni talks to Henry’s widow Ginny Mancini about the history of the song. Breakfast at Tiffany’s Live is on at the Royal Albert Hall on 12 and 13th June.