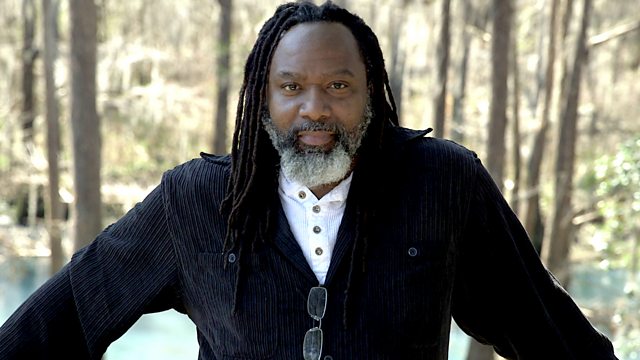 Aasmah Mir and Richard Coles are joined by the American stand-up comic Reginald D Hunter. He talks about growing up in America's Deep South, only being the fourth funniest in his family and how, although having lived in the UK for 17 years, he still gets caught out by our 'common' language.

Andre Anderson comes from an estate in North West London with a reputation for gang violence and crime. He tells us about 'Authors of the Estate' - a project to encourage others to find their voice in the pen, rather than the knife or gun.

Juliet Russell is a singer, composer and vocal coach (including for BBC1's The Voice), working with artists from Damon Albarn to Paloma Faith. She talks to us about vocal bad habits and how singing is good for people with dementia.

Jake McGowan-Lowe is a bone collector and naturalist. He been collecting bones since he was 6. At 13 he's just been nominated as one of the most important conservation heroes in Britain.

40 years ago listener Douglas McGowan bought the Waverley paddle steamer for £1. He tells us about the impact that has had on the rest of his life.

Actor and musician Hugh Laurie chooses his Inheritance Tracks - 'Tumbling Dice' by the Rolling Stones and 'Cantaloupe' by Herbie Hancock.

**Tomorrowland starring Hugh Laurie and George Clooney is out in cinemas now.
**Reginald D Hunter's tour continues at venues across the country throughout June.
**Authors of the Estate By Andre Anderson et al is available to buy online.
**Juliet Russell's album is called 'Earth Meets Sky'.
**Jake's Bones by Jake McGowan-Lowe is available from all good bookshops.