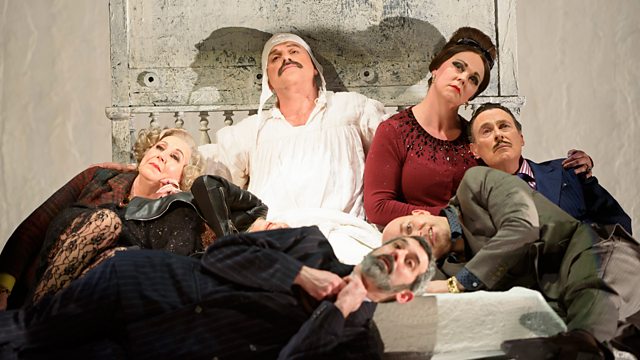 The grandmother of Salud is concerned by the love-sickness that affects her granddaughter,

who bewails the absence of her lover, Paco. She asks her grandmother, who already suspects

Paco of being unfaithful, to look out and see if he is coming. When Paco arrives he promises

to be faithful to Salud and she declares her passionate love for him. The grandmother watches

them happily until Uncle Sarvaor comes in, threatening to kill Paco. He explains that Salud is

being betrayed by Paco, who plans to marry another woman the very next day.

A party is taking place to celebrate the wedding of Paco and Carmela. As a singer entertains

the guests, Salud looks on, seeing Paco with his bride. Sarvaor and the grandmother are

unable to comfort Salud, and they curse Paco.

Paco is trying to hide the discomfort he feels at Salud’s unexpected presence. Manuel, Paco’s

new brother-in-law, congratulates the bride and groom, then catches sight of Salud and

Sarvaor. He questions their presence. Salud angrily replies that she has come to see Paco,

to beg him to end the pain he is causing her. Paco tries to deny that he has betrayed her,

accusing her of lying. Salud cries that it is he who has lied and, despairing, kills herself.

Opera in one act

Libretto by Giovacchino Forzano, based on a brief episode in Dante’s Divine Comedy

Dante Alighieri, supreme poet of Italy, presents an episode from his ageless work, the

him. But a rumour spreads among them that Buoso has left all his wealth to Friars at Signa,

which prompts a frantic search for his will. Rinuccio finds it, but won’t let anyone else see

it until he is promised by his aunt Zita that he will be allowed to marry Lauretta, daughter of

Zita gives her permission and Rinuccio sends Gherardino to fetch Lauretta and her father, who

is famed for his cunning, but looked down on by the relatives because of his low birth. The

Schicchi arrives with Lauretta to a hostile reception. He makes to leave, but Lauretta begs him

to stay and make possible her marriage to Rinuccio. Schicchi devises a plan: the relatives will

keep Buoso’s death secret long enough for Schicchi, disguised as Buoso, to make a new will

in which the money is left to the relatives.

The plan delights the relatives and Rinuccio is dispatched to fetch a lawyer. Each of the

relatives proceeds to bribe Schicchi to favour them over the others in the will. Schicchi

accepts all the bribes, but reminds the relatives that should the scheme be discovered the

full force of Florentine law will fall not only upon him, but upon them as well.

a new will, leaving the best part of the estate to ‘his dear, devoted friend – Gianni Schicchi’.

The relatives realise that they are helpless to do anything about it. After the lawyer leaves

there is uproar: insults fly and the relatives ransack the house. But Schicchi drives them all

Rinuccio and Lauretta are united, and Gianni Schicchi asks if old Buoso’s money could

possibly have been put to better use than this?