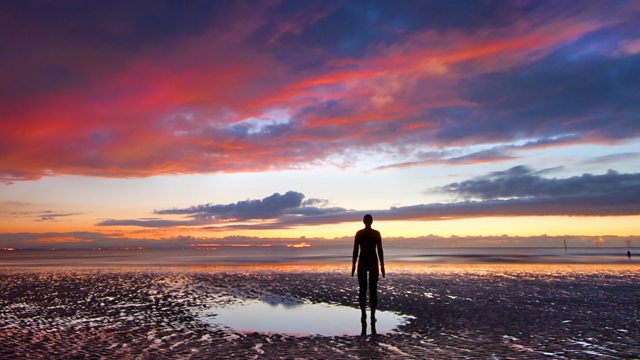 Another Time, Another Place

On its tenth anniversary, Sara Parker visits Antony Gormley's haunting installation Another Place on Crosby beach and talks to the artist and those whose lives are touched by it.

For ten years, Crosby Beach near Liverpool has had some strange visitors - 100 figures by Angel of the North creator Antony Gormley. Based on casts from moulds of the artist's body, the sculptures are made out of cast iron and stand staring at the horizon along three kilometres of shore, stretching almost one kilometre out to sea.

The installation, called Another Place, was never meant to be permanent and there was opposition to it - from conservationists, yachtsmen and those who considered the naked form to be pornographic. But the locals came to love the figure and fought to keep them and, nearly a decade on, the sculptures are still there.

Unusually for a piece of art, Another Place is a favourite on the travel site Trip Advisor, with over six hundred reviews rating it an average of five stars. This is an artwork that speaks to people. Visitors dress the figures in hats and scarves. People leave flowers beside them.

Sara Parker meets Antony Gormley in his Kings Cross studio and discovers how the project was conceived out of both an artistic vision and an attempt at economic regeneration. She also visits the Birmingham foundry where the figures were cast and, of course, Crosby beach itself where she meets those whose lives have been touched by this haunting artwork.