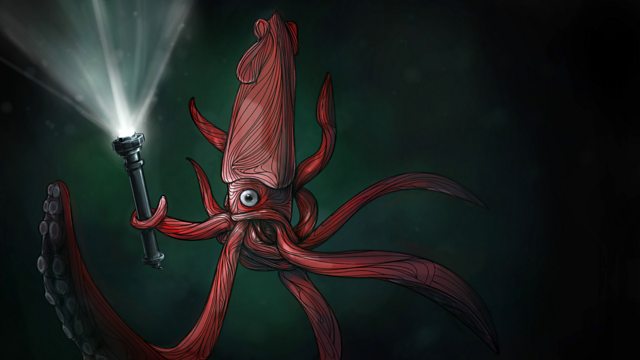 Brett Westwood delves into the mysteries surrounding giant squid to ask why it is portrayed as a Kraken lurking in the deep when studies show a timid, misunderstood creature.

Brett Westwood tries to uncover the truth about the elusive giant squid. Is it the monster literature portrays lurking in the deep of the ocean or a timid misunderstood creature?

Tennyson evokes the deep, slumbering Kraken as a monster slumbering in the cold, dark depths of the ocean. Twenty Thousand Leagues brings that monster into focus as it tries to drag a ship underwater and devour the terrified crew. Where did these stories come from?

The Odyssey was the first known piece of literature to suggest a tentacle beast of the sea and it has never left our imagination. Yet when a giant squid was filmed by Japanese scientists, and then one was fished out of the ocean near the Falklands, we now see that giant squid are extraordinary, rather beautiful creatures.

Far from being a terrifying monster they peck delicately at their food and are afraid of loud noises. For a monster they are remarkably timid. With recent discoveries and increasing knowledge have we vanquished the monster from the deep? Or will our need for monsters mean we create another, even stranger beast? Or perhaps now that our sea faring days exploring the unknown oceans are over will our monsters come from outer space, the last frontier?

Will we always need a monster to scare us? Many academics say yes - if you want to know what a society is frightened of, look at its monsters.

See all clips from Giant Squid (3)

Jon Ablett has worked at the Natural History Museum for 12 years as a curator of the Museum’s Mollusca collection, which contains around nine million specimens. Jon specialises in slugs, snails, squid and octopus.

One of the specimens under Jon’s care is Archie, an 8.62m giant squid and the largest wet specimen ever preserved at the Museum. It was Jon’s responsibility to design, manage and implement the preservation, storage and display of this enormous creature.

Archie was caught off the Falkland Islands in 2004 and is on display in the Tank Room. Molecular samples taken from this specimen were used in a study which showed that there is only one world-wide species of giant squid.

Jon’s main interests are in the biodiversity of south-east Asian and South/Central America land snails. He has conducted fieldwork in Vietnam where he collected new specimens and new species for the Museum as well as frozen tissue and viable cells for our molecular collections.

Dr Emily Alder is lecturer in literature and culture at Edinburgh Napier University and her research focusses on literature and science of the long nineteenth-century, particularly the intersections between late-Victorian and Edwardian biology, physics, and ‘pseudosciences’ with Gothic, weird, supernatural, and science fictions.

Dr Mathias Clasen is an assistant professor of literature and media at Aarhus University, Denmark. He specialises in the psychology and evolution of scary entertainment and has written on horror in various media as well as zombies, vampires, and other creatures that go bump in the night.

He has shown how our present-day fascination with horror and monsters is underpinned by psychological mechanisms that have their roots in ancient biological adaptations, which evolved in response to the many natural dangers faced by our evolutionary ancestors.

Dr Edith 'Edie' Widder is a MacArthur Fellow, a deep-sea explorer and ocean conservationist.  A specialist in bioluminescence, she has been a leader in developing new ways to explore the deep sea.

Her innovations have produced footage of rare sharks, jellyfish, and crustaceans, as well as led to the discovery of a new species of large squid and the first recordings of the giant squid, Architeuthis, in its natural habitat. She is co-founder of the Ocean Research & Conservation Association, a not-for-profit which develops technological solutions to ocean conservation challenges.