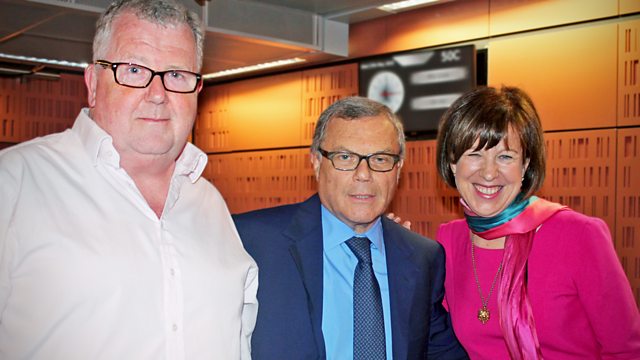 Sir Martin Sorrell is the most influential man in advertising. As the CEO of WPP, the world's largest advertising group, he is one of the world's most connected executives. After 30 years, WPP now embraces some of the best known names in advertising and PR - including Ogilvy and Mather, J Walter Thompson and Burson-Marstellar. Steve Hewlett talks to Sir Martin about the balance of power between traditional and digital media; how information about us online is informing creativity in advertising, and as he turns 70, what's next for him, and the advertising empire he has created.

The High Court has awarded damages totalling nearly £1.2m to eight people whose phones were hacked by some journalists Trinity Mirror newspaper group. Eight claimants -- including the actors Shane Ritchie and Shobna Gulati - were paid, 'very substantial' damages in the civil case against thr group. The largest amount was awarded to Sadie Frost who received damages of £260,250. Steve Hewlett talks to Hugh Tomlinson QC, lead counsel to victims of the News of the World phone hacking scandal, and Bob Satchwell, Executive Director of the Society of Editors, about the scale of damages and how this case might damage celebrity journalism.

On the day Lyse Doucet is presented with the Sanford St. Martin Award for her reporting of religious affairs, Steve meets the BBC's Chief International Correspondent. The Canadian born journalist began her career in West Africa in 1983 and has reported on conflicts in Iraq, Syria and across the Middle East on the Arab Spring. This award acknowledges her work in 'raising the profile of religion in the media.' What are the added challenges that reporting faith-based conflict brings to her role?