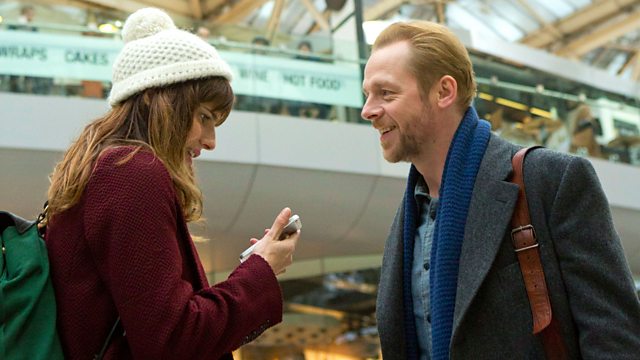 Arts news, including the writer and director of Temple, which is a play about the Occupy movement, author Dennis Lehane and new comedy Man Up. With Samira Ahmed.

In his new film Man Up, Simon Pegg plays Jack, a divorcee who goes on a blind date, but a case of mistaken identity at the first meeting has unexpected consequences. Naomi Alderman reviews the rom-com directed by Ben Palmer, best known for The Inbetweeners.

Playwright Steve Waters and director Howard Davies discuss Temple, a fictionalised telling of the Occupy movement's 2011 protest at St Paul's Cathedral. Simon Russell Beale stars as the Dean of St Paul's who resigned in October 2011 after criticism of the way the situation was handled by the Cathedral.

As a lock of Mozart's hair goes up for auction at Sotheby's, curator Ross McFarlane from the Wellcome Collection discusses our fascination with grisly mementoes and why museums and private collectors are interested in these relics.

Man Up is in cinemas from 29 May, certificate 15

Temple is at The Donmar Warehouse, London until Saturday 25 July

World Gone By is available now.