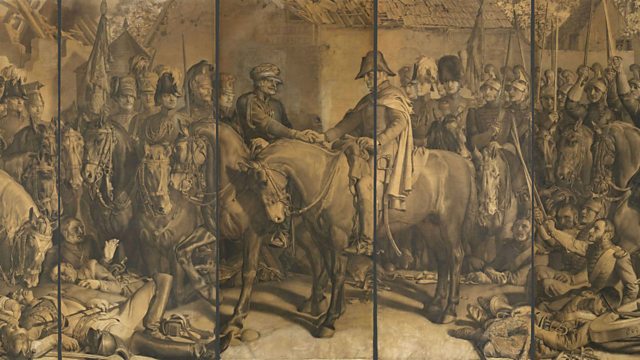 One of the most important - and largest - drawings ever made in Britain, Daniel Maclise's 'The Meeting of Wellington and Blücher after the Battle of Waterloo', goes on show today at the Royal Armouries in Leeds. It hasn't been displayed for 40 years and has been painstakingly conserved. Front Row observed that process.

Mahan Esfahani is a virtuoso harpsichordist having something of a moment: his new album exploring the relationship between Minimalist and Baroque music, Time Present and Time Past, has won warm reviews, and earlier this year he was named Newcomer of the Year in the BBC Music Magazine Awards. He talks to Kirsty about the status of the instrument and how Baroque can speak to Minimalism.

Jason Solomons joins Kirsty for a final report from the Cannes Film Festival and looks ahead to which films are in the running for the big prizes being awarded this weekend.

Crime-writer Mark Billingham and British country duo My Darling Clementine discuss The Other Half, a CD and stage show they've created, set in a down-at-heel bar in Memphis. Billingham has written and narrates a short story of love, loss and hope, accompanied by MDC's songs of heartbreak and pain.

The Meeting of Wellington and Blücher after the Battle of Waterloo by Daniel Maclise was restored by Royal Academy in London.

The Cartoon will be showing at Waterloo 1815: The Art Of Battle Exhibition at the Royal Armouries  in Leeds until 23 August 2015.  It will then be on display at the Royal Academy in London from 2 September 2015 until 3 January 2016.

Time Present and Time Past by Mahan Esfahani is out now.

The Cannes film festival continues until Sunday 24 May.

The Other Half by My Darling Clementine is out now. They will on tour across the UK from 10 June until 28 November 2015