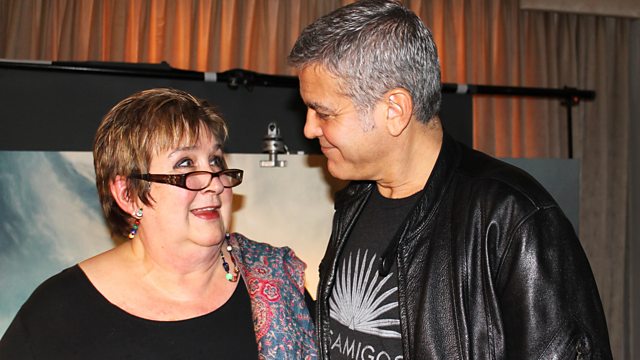 George Clooney on his new film Tomorrowland and what it's like to grow old in Hollywood.

The first Women's Court in the former Yugoslavia addressing the crimes committed against them during the wars. Barrister Kirsten Campbell talks about the importance of a 'feminist approach to justice.' Women in One - a collection of short interviews with strangers in Leeds.

Rachel Treweek, the first woman to run a diocese and the current Archdeacon of Hackney who will become the new Bishop of Gloucester. Woman's Hour's 2015 Power List: Influencers - Claudia Croft and Frances Card on who influences women's fashion.

In 2005 George Clooney was ranked  number 1 in the ‘50 sexiest stars of all time’  and he was named one of Time magazine's 100 Most Influential People in the World’.  Until last September when he married Amal Alamuddin, he was known as the world’s most eligible bachelor. He gained world-wide fame as Dr Doug Ross in the long running TV drama ER and he went on to star in big Hollywood movies such as Brother Where Art Thou and the Ocean’s Eleven films. He’s known as much for his humanitarian efforts particularly in Darfur, as he is for his acting, for which he’s won three Golden Globes and two Academy Awards. Clooney stars in a new film out today called ‘Tomorrowland’, a Disney  mystery adventure with a serious message in which he plays a former boy-genius Frank Walker who has become  disillusioned  with the future of  humanity. He joins forces with a bright, optimistic teen called Casey to unearth the secrets of an enigmatic place somewhere in time and space known only as “Tomorrowland’

In 2014, the Church of England voted to allow women to be ordained as bishops for the first time. Since then, the Church has announced the appointments of three women to the position. Jenni hears from the most senior of them – the current Archdeacon of Hackney, the Venerable Rachel Treweek who will become the first women to run a diocese as the new Bishop of Gloucester.

Reporter Abigail Hollick was inspired to interview strangers and find out what makes them tick after she spent weeks pushing her new born son in his buggy up and down the same streets and smiling at the same faces, wondering what they were thinking and whether they too had had two hours sleep. Abigail’s first confessional series, 'Street Talk', focused on her neighbourhood but this time she turns her attention to women around the UK, starting in Leeds. ‘Women in One' is a new Woman’s Hour collection of one minute (or thereabouts) interviews with strangers Abigail bumps in to. A diverse range of women express their fears, loves, losses and answer personal questions such as ‘What’s your relationship like with your mother?’, ‘Who broke your heart?’ and ‘What keeps you up at night?’. The series starts in Leeds where women in Roundhay Park, Kirkgate Market, The Corn Exchange and Trinity Shopping Centre were more than happy to open up

This year’s Power List is all about influence, so who are the people wielding their power in the fashion industry? Why are clothes covered in pineapple prints this season? Is it really the high fashion catwalks which decide that cerulean is this season’s colour (as Meryl Streep explained to us all in the film The Devil Wear’s Prada)? Is it style icons, like Victoria Beckham, or hidden fashion buyers for the high street shops?

Jenni is joined by Fashion editor of The Sunday Times Claudia Croft and fashion consultant Frances Card to find out who is influencing our fashion decisions.

Let us know who is influencing you on Twitter: @BBCWomansHour #whpowerlist or email us.

Women's Court in the former Yugoslavia

Earlier this month women from all parts of the former Yugoslavia who want justice for the crimes committed against them during the wars and the inequalities that followed, came together in a new Women’s Court. It was the first in the region, and in Europe, and took what they call a ‘feminist approach to justice’, with women sharing their stories of violence, rights violations, and injustice. To discuss the court, why its so important, and the injustices it sought to address, Jenni is joined by two women from its Judicial Council: to Vesna Terselic a human rights and peace activist in Croatia and Director of Documenta – the Centre for Dealing with the Past, and by Kirsten Campbell – a barrister and an academic at Goldsmiths University, researching gender and law, and sexual violence in the former Yugoslavia.
The Women's Court