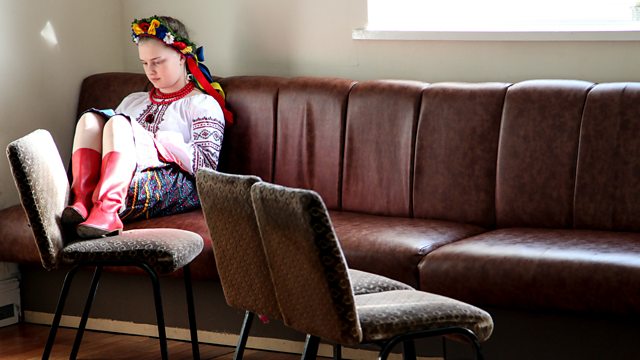 A Short History of Ukrainians in Britain

Oliver Bullough travels to Manchester, Edinburgh and London to meet British Ukrainians, whose family histories reflect the pride, suffering and rebirth of their homeland.

Few people in Britain knew much about Ukraine until its recent revolution and war with Russian-backed rebels filled the news headlines. But, for decades, towns and cities across the UK have been home to Ukrainian communities created by refugees from a previous attempt to break free of Moscow's control.

Award-winning author and journalist Oliver Bullough travels from Lockerbie and Edinburgh to Manchester and London to hear the stories of Britain's Ukrainians. He hears of the prisoners of war arriving after the Second World War - Ukrainians who fought with the German army against the Soviet Union, and then won asylum in the UK - and how they mingled with compatriots already here.

Determined to preserve their culture in exile, they established churches and community centres, passing on their language, music and folklore to their British-born children. They dreamed of one day returning to a free homeland but, post-1991, when they could finally do so, it was a disappointment - corrupt, blighted and poor. More Ukrainians came from Ukraine to Britain, than left Britain for Ukraine.

This is a story told in several voices - a musician who teaches the bandura (a traditional Ukrainian stringed instrument) to children in Manchester, the caretaker of a Ukrainian prisoner of war chapel in Lockerbie, a Scottish-Ukrainian SNP politician, a choreographer and a London GP. Set between these voices are the sounds of music-making, dancing, church services and protests on the streets of London.

We hear how the revolution and war in Ukraine have galvanised Britain's Ukrainians to raise money and awareness for the future of their homeland.

Producer: Cicely Fell
An Above the Title production for BBC Radio 4.

After the Second World War, some 35,000 Ukrainian prisoners of war were resettled in camps across the UK.