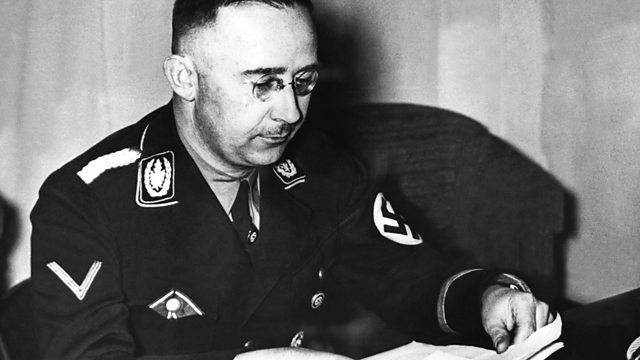 Himmler: The Decent One

A Storyville documentary: Through letters, photos and diaries, this film exposes a unique and often uncomfortable access to the life and mind of SS commander Heinrich Himmler.

Through previously undiscovered private letters, photos and diaries that were found in the Himmler family house in 1945, this documentary exposes a unique and at times uncomfortable access to the life and mind of the merciless 'architect of the Final Solution', Heinrich Himmler. Himmler writes, 'In life one must always be decent, courageous and kind-hearted'. How can a man be a hero in his own eyes and a mass murderer in the eyes of the world?

The text of the film consists exclusively of original documents from Himmler's lifetime, combined with news and personal archive from sources ranging from the descendants of top Nazis to working-class individuals. It forms a unique portrait of one the most prominent figures of the Third Reich, the SS commander Heinrich Himmler.

My Mother the Secret Baby

Vanessa Lapa, director of Himmler: The Decent One, answers the Storyville Q&A

What is more important, story or character?
Story.
The character is the tool to tell the story.

What made you first want to explore the subject?
The phone call I got that there is a never read nor published collection with the private Himmler letters, diaries and photographs.

How long did it take to get the film off the ground?
The whole filmmaking/project took eight years.

What were you most surprised to learn in the course of production?
1) The fact that almost everything we all know about WW2 is what the German propaganda machine showed us and the amount of private footage/home videos that is out there, never seen before and often never even digitized.
2) The role of digital restoration, which is bringing the image to how it looked when it was shot. The scratches, mould, dust and other defects are time defects and not the authentic shots.

What have been the differences in reception to the film in countries it has now travelled to?
In all of the countries the reception has been extremely positive, raising curiosity, reflection and a lot of questions on different levels.
East Europe: mainly questions on the filmmaking process, the choices of storytelling, image and sound.
West Europe: mainly questions on the artistic choices, on the image restoration process, the sound world.
On the influence of such a project on a personal level.
The educational angle.
USA: The archive research and new approach for a documentary film.
The historical angle, with an accent of the amount of “never seen before” images.
Deep reflection on evil, on humanity and on politics.
Israel: Surprisingly positive (seven months in cinemas all over the country) in a country where most of the people are "fed up" on WW2 documentaries.
Documentary filmmaking approach.
Educational angle.
Germany: Very difficult reception. The audience is on one hand very angry as they were overwhelmed and thus unable to take the necessary perspective for a wider reflection than Himmler and Germany.
On the other hand uncomfortable with the way in which the story is told. A form, particularly on this subject matter, they are not used to: archives with sound, the silence, the lack of talking heads (survivors, historians) and the lack of narration.
Asia and Africa: The Decent One will be released in Asia this summer.

Which documentary has most inspired you?
“Gates of Heaven”, “The Thin Blue Line”, “The Fog Of War”. All of Errol Morris' documentary films.

Favourite website/blog?
I am not a website/blog reader, I do not know enough to answer this question.
To me, it remains the NY Times Book Review.

Person you’d most like to interview (living or dead?)
Franz Kafka, Oscar Wilde, T.S. Eliot.
Oskar Groening (currently on trial) or any other Nazi/perpetrator/criminal who is not an extreme fanatic or mentally ill and who had choices.

Best piece of filmmaking advice you’ve ever been given?
Have at least one comic relief even in the most serious/dramatic subjects.

Best piece of filmmaking equipment you can’t live without?
A good microphone.

If money was no object, what is your dream documentary subject?
This would be revealing my next film and it is too soon.
I would definitely want to do a documentary series on the same subject matter, the judicial system for example, with every episode shot in a different country and in at least ten different countries.

Favourite film of all time?
This is an impossible question but one that keeps haunting us, film people, all the time.
“Dog Days”, “Citizen Kane”, “Blade Runner”, “Annie Hall”, “A Clockwork Orange”, “The White Ribbon”, “Bicycle Thieves”, “La Dolce Vita”.

Most difficult access?
For The Decent One: home videos of high-ranking Nazis.