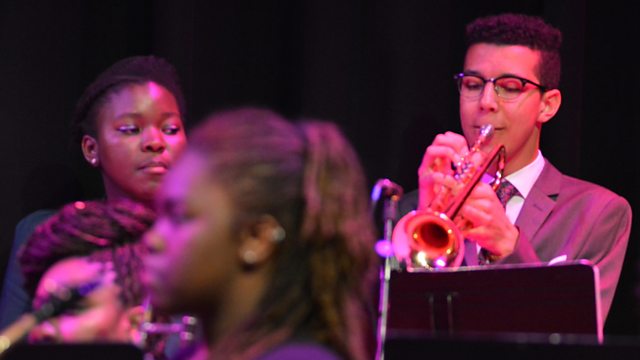 Founded by bass player Gary Crosby, the Tomorrow's Warriors scheme has been an important cornerstone of British jazz for over 20 years - shaping the careers of young musicians through workshops, performance platforms and a restless collective spirit. Today the Tomorrow's Warriors Youth Orchestra continues to produce some of the finest next-generation players and here at London's Southbank Centre the 17-piece ensemble premieres new work by some of the collective's esteemed graduates, including Nathaniel Facey, Yazz Ahmed, Peter Edwards, Ben Burrell and Binker Golding.

Titled Bridge To Our Memories, the new series of pieces evokes African storytelling, high-life, Caribbean folk and Arabian rhythms, embodying the individual cultural backgrounds of the writers and reflecting on the changing face of Britain.

BBC Radio 3's Young Artists Day.
Radio 3 salutes some of the new and upcoming talent active in the arts today under the age of 25. As well as hearing from young choreographers, composers, musicians and writers throughout the day, Radio 3 will be playing music of great composers in their youthful periods, alongside recordings of seminal performers made when they were young.

In the Shadow of Kafka: Blue-Eyed Hawk in Session