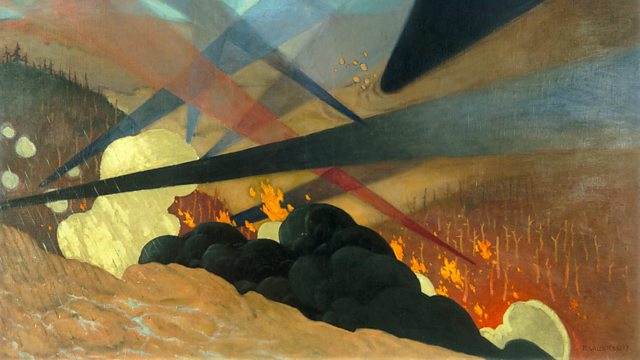 War on the Mind

World War One: The Cultural Front Series 2
Episode 3 of 3

Francine Stock looks at how the harrowing effects of World War I began to make themselves apparent in art, music and poetry.

In the last in the series covering 1915, Francine Stock looks at how the harrowing effects of World War I began to make themselves apparent in art, music and poetry. For the first time, the condition which would become known as 'shellshock' was becoming apparent, and the full psychological effect of trench warfare on soldiers began to take its toll.

We look at Sigmund Freud's Essay 'Reflections on War and Death' and look at how the newly diagnosed mental conditions were being addressed. Poetry, music and art begin to reveal the underlying traumas of this sustained conflict. Propaganda and patriotism did not always win the day, as we find in the German Expressionist paintings revealing the true nightmare of the trenches.

In music, we find patriotism still a driving force. British concert parties were travelling to the front to help encourage the troops, headed by the remarkable actress, impresario and suffragette Lena Ashwell. The French composer Debussy was deeply affected by the war, yet managed to make 1915 his most creative year.

In poetry, Robert Frost had written 'The Road Not Taken' after taking country walks with an English friend, Edward Thomas. Frost posted a copy of the poem to Thomas as a way of chiding him about indecision, but his friend was not amused. Within a short space of time he decided to enlist and go to war.

By the time 1915 drew to a close, any hope of a quick end to the war had faded, and the cultural front revealed a new fragility in the face of the such a bleak outlook.

See all episodes from World War One: The Cultural Front