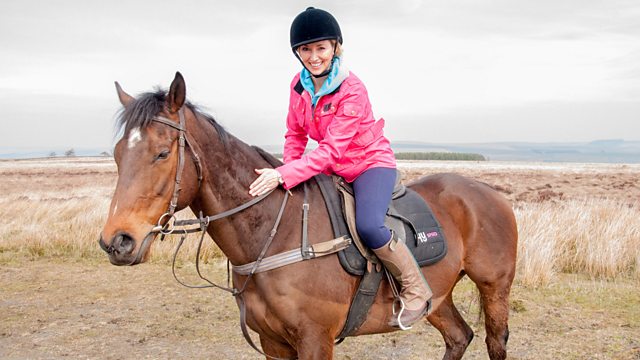 To celebrate its 50th anniversary, Claire McCollum explores one of the many spiritual stops along the epic Pennine Way - and we meet winning members of the Songs of Praise FA Cup Fans Choir, specially selected to sing Abide with Me at the Cup Final.

Pennine Way
The Pennine Way was opened to the public in April 1965, after protests demanding access to the countryside, alongside a 30-year campaign by journalist and rambler, Tom Stephenson.

Claire McCollum went to Northumberland to visit one of the many spiritual stops along the epic walk, there she met Susan Ramsaran, the reverend of a 400 square mile parish, who loves to ride her horse Molly across the stunning landscape.

Whilst walking a part of the Pennine Way, Claire stops for some natural refreshment at St Cuthbert's Church, where a spring was blessed by Saint Cuthbert 1300 years ago, and is still running today.

School Choir of the Year 2015 – Judges Announced
Aled Jones looks ahead to next week's school choir’s competition and reveals who the judges are this year:

Tim Rhys Evans
Tim, from New Tredegar in South Wales, started Welsh Male Choir Only Men Aloud in January 2000. Tim's belief in singing as a life-enhancing activity underpins everything that he does professionally. Tim also founded Only Boys Aloud and Only Kids Aloud introducing singing to the younger generations. Tim was awarded an MBE to recognise his achievements in 2013.

Yvie Burnett
Yvie is not only a classically trained mezzo soprano but also a singing teacher who has been behind the development of singers across many of the UK and US singing and talent shows of the last decade. Yvie first became known through her work on The Voice and X Factor. During her time on the shows, she has coached the likes of Susan Boyle and Paul Potts.

JB Gill
JB is best known as a member of the boy band JLS. They came second in The X Factor in 2008. JB joined his school choir where he discovered his love of singing and in particular harmonies. JB also studied theology at King's College London before starting his career in music. Since JLS split JB has become a farmer and a father.

Noah Stewart
Noah Stewart’s musical development started in Harlem where he studied classical music at The Harlem School of the Arts. At age 12, his choir teacher encouraged him to pursue a music career. He went on to sing back-up vocals for pop artists such as Hootie and the Blowfish, and Coolio. He was recommended by his mentor, the great soprano Leontyne Price, to attend The Juilliard School, where he was awarded a full scholarship.

Noah’s debut album became a major success, topping the classical charts for 7 weeks. He’s also had major roles at the English National Opera and The Royal Opera House and Noah is currently on tour in the United Kingdom with his own show, ‘So in Love’.

FA Cup Stories
The FA Cup Fans’ Choir is a new initiative set up between Songs of Praise and BBC Sport to find an a choir of football fans representing all 64 teams that featured in the FA Cup 3rd round to sing 'Abide With Me' at this year's FA Cup Final. It’s an amazing opportunity to sing at Wembley in front of 90,000 and a worldwide audience of hundreds of millions.