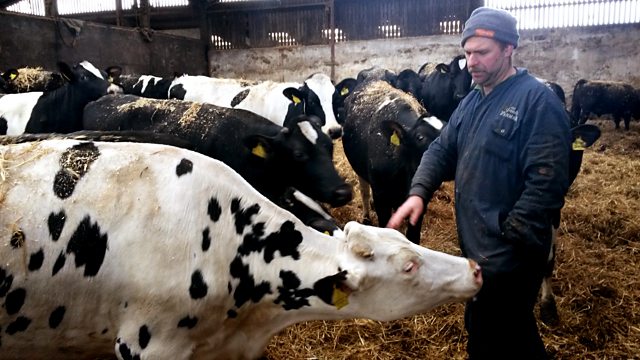 Herd under the Hammer

Lives in a Landscape Series 19

Alan Dein meets Steve Graham as he sells his herd of 1,000 dairy cows at the largest UK auction of 2015. Having woken at dawn for 35 years, how will he adjust to life without them?

Alan Dein meets farmer Steve Graham as he sells his herd of 1000 dairy cows - the largest UK sale this year. Having woken at dawn for 35 years to milk the cows, he has decided to sell - but how will he adjust to life without them?

Steve's life has been governed by the relentless pattern of milking twice a day, and the pressures of rearing the cows from birth and caring for them throughout their lives. On his farm in Devon, he says "There are a lot easier ways of making money than milking cows. But if you don't look after them, they won't look after you."

Alan joins Steve on the farm on the final days with his herd and travels with him to the market. When the cows hit the ring, it is not just them being judged, but Steve's reputation on the line.

At auction, Alan hears from fellow farmers about the state of the dairy industry and the pressures put upon them by a falling milk price. But Steve reveals that his reasons for leaving the industry are more personal.

Steve at morning milking on his farm

Steve and daughter Rebecca in the auction room in Holsworthy market