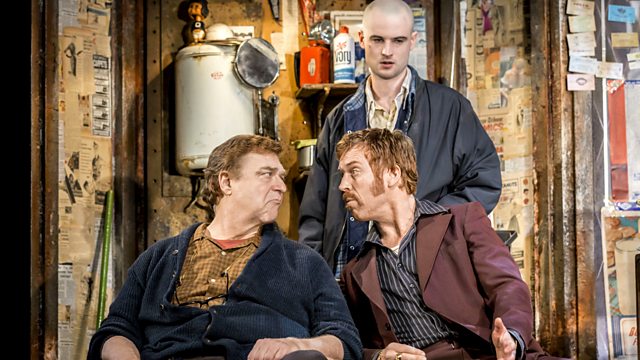 A Pigeon Sat on a Branch Reflecting on Existence, winner of the 2014 Venice Film Festival's Golden Lion Award, is the final part of Swedish director Roy Andersson's trilogy about what it means to be a human being. Larushka Ivan-Zadeh reviews.

Sam Lee discusses his new album The Fade in Time, every track of which is a song he has collected from Gypsy, Traveller and traditional singers. Sam has arranged these ancient songs with unusual instruments - including a Japanese Koto - archive recordings and all the resources of a modern recording studio, so how has he remained true to their spirit?

The line-up for this year's BBC Proms is announced today. Fiona Maddocks of the Observer joins Kirsty to assess the 2015 offering, which includes celebrations of Nielsen, Sibelius and Boulez, a Prom dedicated to the mind of Sherlock Holmes, and the return of Marin Alsop to conduct the Last Night.

American Buffalo is at the Wyndham's Theatre in London until 27 June 2015.

A Pigeon Sat on a Branch Reflecting on Existence

A Pigeon Sat on a Branch Reflecting on Existence is in cinemas from Friday 24 April, certificate 12A.

The BBC Proms 2015 programme was announced earlier today, ticket booking opens on 16 May 2015.

The Fade in Time by Sam Lee & Friends is out now.