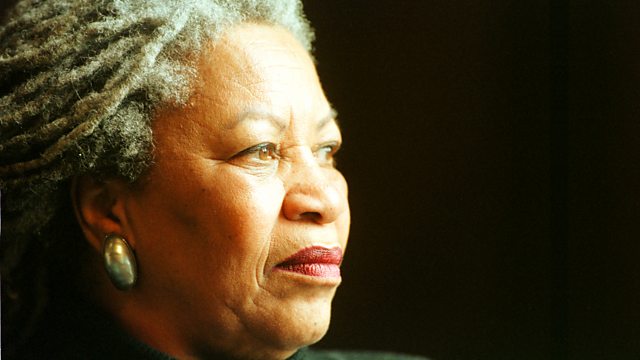 Presented by Samira Ahmed. Including Toni Morrison on her latest novel, God Help the Child; a review of Peter Kay in Car Share; and Indigenous Australia at the British Museum.

Nobel Prize-winning author Toni Morrison joins Samira Ahmed to discuss her latest novel, God Help the Child, which returns to the relationship between a mother and her children, a theme she explored in Beloved.

Indigenous Australia is a major new exhibition at the British Museum charting colonialism's impact on the Aboriginal people. The show features rock and bark paintings, masks, basketware, tools and historical objects, such as a shield which Captain Cook collected in Botany Bay in 1770. Samira talks to curator Gaye Sculthorpe who has indigenous heritage in Tasmania.

Peter Kay's latest project is Car Share, a 6 part TV series which will premiere on iPlayer. When an out of town supermarket issues a new car share scheme, Assistant Manager John (Peter Kay) and Promotions Rep Kayleigh (Sian Gibson) are forced to commute together. Boyd Hilton reviews for Front Row.

Edgar Allan Poe, master of the macabre, is also a pop muse. His poems have been adapted by rock stars for years, the most well-known being Lou Reed's The Raven. Kevin LeGendre considers why Poe's ghost is writ large on music.

Peter Kay’s Car Share will available to watch on BBC iPlayer from 24 April at 9pm until to 28 April. It will later be broadcast on BBC One.

Indigenous Australia: enduring civilisation is at the British Museum in London from 23 April to 2 August 2015.

Image: Shell Necklace, displayed at the Great Exhibition, London, 1851. Oyster Cove, Tasmania, before 1851 © The Trustees of the British Museum.

By The Sea...And Other Solitary Places by Annabel Lee was released in store for Record Store Day on Saturday 18 April, copies will be available to order online from Saturday 25 April.