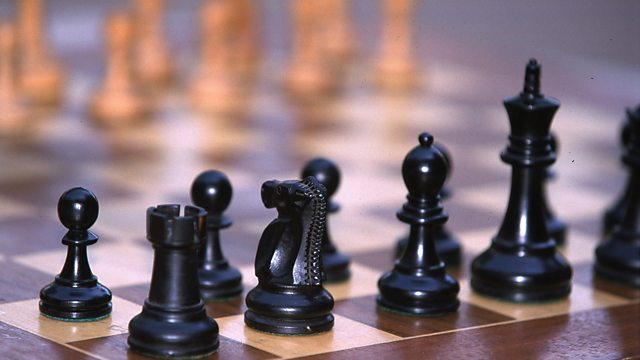 Are women's brains 'hardwired differently' when it comes to playing chess? Robin Rinaldi on her midlife quest for passion. Pioneering Pakistani feminist and lawyer Hina Jilani.

Should women just accept they are not as good at chess because they are 'hardwired differently'? We hear from Judit Polgar, the world's best female player for 26 years who spoke to Woman's Hour in 2012 and ask if there is any scientific basis for this claim. Robin Rinaldi on her midlife quest for passion and a year of exploring everything she ever wondered about sex in an open marriage. Pioneering Pakistani feminist and lawyer Hina Jilani on her campaign for women's rights in her country, her work against honour killings and founding Pakistan's first all- female law firm. How the discovery of a hidden suitcase allowed a Holocaust survivor to open up to her daughter about her traumatic childhood. And with summer on its way, do men as well as women worry about getting into shape for the beach?

Phone-in: Dealing with a Relationship Crisis

‘I’m a 44 year old professional, educated, attractive women in an open marriage, seeking single men age 35- 50 to help me explore my sexuality’.  This was the ad which San Francisco based magazine journalist Robin Rinaldi placed in the Casual Encounters section of a website. In her memoir ‘The Wild Oats Project’ she reveals what inspired her to write that ad and what followed when she spent a year living in an open marriage with her husband Scott. Robin joined Jane to talk about how her longing for a baby, one which he husband did not share, lead her to seek out other ways to find passion, a year of sexual awakening and the impact on her marriage.

The Wild Oats Project, One Woman’s Midlife Quest for passion at any cost, is Published by Hodder & Stoughton

Should women just accept they are not as good at chess because they are ‘hardwired differently’? Leading chess player Nigel Short has claimed so in comments made in the ‘New in Chess’ magazine about the lack of women playing the game; he said “It would be wonderful to see more girls playing chess, and at a higher level, but rather than fretting about inequality, perhaps we should just gracefully accept it as a fact.”

Judit Polgar who was the youngest player of either sex to be awarded the title of grandmaster at the age of 15 Polgar disagrees. She was the world’s best female player for 26 years; she also beat Nigel Short in eight classical games to three in total with five draws. She says "Men and women are different but there are different ways of thinking and fighting still achieving the same results.” Neurologist Dr Gina Rippon of Aston University joins us to discuss the evidence.

Family secrets from the Holocaust

Zahava Kohn and her parents were taken from their home in Holland to the Bergen-Belsen concentration camp when she was just eight years old. Zahava rarely spoke about her traumatic childhood and how she survived more than a year of starvation and disease, but all that changed in 2001 when her mother died and she discovered a tiny suitcase tucked away in a cupboard. The contents of this suitcase proved to be a remarkable archive of one family’s Holocaust experience: a trove of perfectly preserved original documents, photographs and letters. Zahava’s daughter, Hephzibah Rudofsky, on seeing the suitcase encouraged her mother to talk about her experiences in the camp for the first time. Zahava and Hephzibah join Jane seventy years after the liberation of Bergen-Belsen concentration camp to discuss how finding the artifacts has impacted on their relationship and sparked their project ‘Surviving the Holocaust’.

The contents of the suitcase

‘Fragments of a Lost Childhood’ : Zahava Kohn in Conversation with Ann Rosen is available to purchase online.

Pioneering Pakistani feminist and lawyer Hina Jilani has been campaigning for women’s rights in her country since the 1980’s, founding Pakistan’s first all- female law firm and a shelter providing free legal advice and support to victims of gender-based violence.  Hina’s work has made her the target of abuse and arrest, and put her in danger.  She talks to Jane about her work against honour killings at home, and promoting human rights abroad, both with the UN, and as part of The Elders, the elite international group of former statesmen and women, founded by Nelson Mandela.

Tonight at 1830 Radio 4Extra is broadcasting an interview with Dr Mary Stocks (1891-1975) who was a pioneering academic, social worker, educationalist, writer, playwright, early suffragette and broadcaster. The programme is part of a series of interviews called ‘Frankly Speaking’ which was considered 'risky' and 'unkempt' when it originally aired in the 1950s.  But, in 1952, when it was launched on the BBC Home Service it was a completely novel and ground breaking series, because instead of the traditional pairing of interviewee and interviewer there were three interviewers. The original interview was first broadcast in 1964, in which Mary  talks about the first suffragette march and the crowd response.