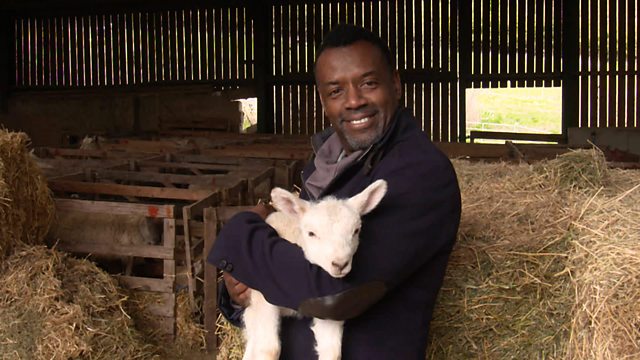 It's Easter Sunday. David Grant is visiting a farm where religion and farming come together for the traditional 'blessing of the lambs' ceremony. Pam Rhodes joins an open-air baptism on the banks of the River Jordan in Dorset!

Easter Lambing
From the Lamb of God to the Good Shepherd, lambs have a religious significance in Christianity. On Coombe Farm and Church, the Passmore family hold an annual blessing of the lamb’s ceremony during the lambing season. David Grant joins them and Reverend Stephen Date for the blessing as well as witnessing ewes giving birth on the day. David also visits Coombe Church on the site, which was built around 1100. The frescos depicting Biblical images on its walls are as old as the church itself.

Peter Howson
Scottish artist Peter Howson’s work is renowned for its insight into the human condition. After a spell as the official British War Artist during the Bosnian war, he faced a battle of his own against depression, coming to a head in 2000. Peter describes his love of religious art and talks about how important his faith is to him.

River Baptism
The River Jordan is one of the most sacred passages of water in the world. According to the Bible, Joshua led the Hebrew people across the river into the Promised Land and it is where Jesus himself was baptised by John the Baptist. Pam Rhodes attends a special baptism service held in the River Jordan…in Dorset! This ancient little stream flows into a Duck Pond in the village of Sutton Poyntz. The local vicar, Rev. Tim West, thought it was too good an opportunity to miss and now holds regular baptisms in the gently flowing shallows. Pam shares in one such service – for baby Lincoln and his family. We also meet Professor Morwenna Ludlow, expert in early church history from nearby Exeter University to explore the meaning of baptism and its connection to Easter.