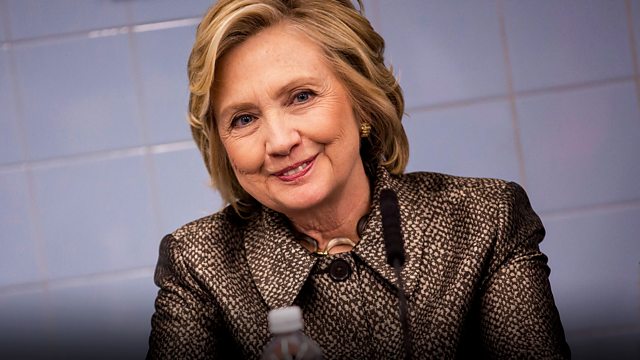 Discussion on Hillary Clinton, the general election and women, Patricia Duncker's latest novel, and why some women say they choose sex work. Presented by Jane Garvey.

The 2016 US Election and the possibilities for a much anticipated Hillary Clinton run for the presidency.

Zoe Williams and Anne McElvoy on how the 2015 General Election campaign is shaping up as the parties battle to win over women voters. And are we getting the politics we deserve?

Patricia Dunker talks about her love of George Eliot and why she features in her latest novel.

And, we discuss research into why some women say they choose sex work.

Hillary Clinton has announced her intention to run again for the US presidency. She began her bid to secure the Democratic Party’s nomination in Iowa at the weekend. She was lampooned for her pantsuits and her ‘cankles’ last time round, and her critics have rounded on her suitability for high office now she’s a grandmother. So how much misogyny will she encounter this time round and how will she deal with it? Jane talks to Margo Miller, Co-Chair of London Ready for Hillary.

The debates are underway, party leaders have been travelling all over the UK and a number of political parties expected to publish their manifestos this week. So with 24 days to go until polling day – are the political parties talking to the issues women voters are concerned about, who’s appealing to women swing voters and who cares about the women who say they won’t be voting? Jane talks to Zoe Williams, Guardian columnist and author of ‘Get It Together: Why We Deserve Better Politics’ and Anne McElvoy, Public Policy Editor of the Economist.

A recent study examined the working practices and experiences of internet-based sex workers in the UK. We hear from Millie, an escort paying for her education. And Dr Teela Saunders, lead researcher, and Kirstin Innes, author of a new novel called Fishnet, join Jane to discuss who chooses to work in the sex industry and why.

George Eliot is one of the most famous nom de plumes in British literature, but who was the woman behind critically acclaimed novels such as Middlemarch, Mill on the Floss and Silas Marner?

Patricia Duncker’s new novel ‘Sophie and the Sibyl’ imagines Eliot’s life between the 1870s -1880s. It explores the relationship she had with her German publisher, Max Duncker and his childhood sweetheart Sophie (who just happens to be her biggest fan). Patricia talks to Jane about blending real-life with fiction and her affection for Eliot.