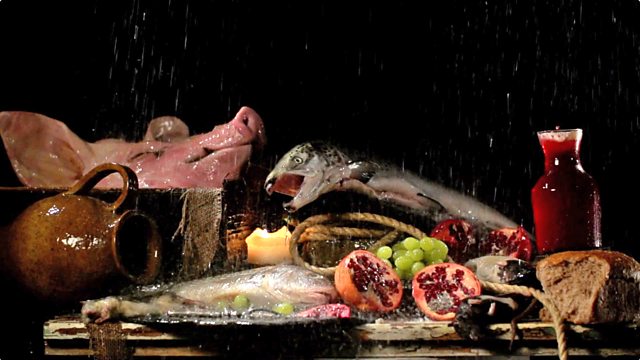 The Raft of the Medusa

By Simon Armitage, inspired by Derek Jarman. With Catherine Cusack. Preceded by Jonathan Watts on Jarman and art and accompanied on BBC iPlayer by a new film by Richard Heslop.

Written by Simon Armitage. Set in the near future, after months of continuous rain all coastal areas of the UK are flooded. Bella and Jude are marooned on their farm in Kent with dwindling supplies, made all too clear by the arrival of a stranger who 'floats' in.

This radio drama was inspired by Derek Jarman and provides the soundtrack to a new film by Richard Heslop, which can be seen on the Radio 4 website.

Shortly before his death in 1994, Jarman was considering making a film based on Theodore Gericault's The Raft of the Medusa which depicts a group of desperate men, abandoned on a raft at sea. He wrote about it in his notebook, but the film was never made.

Taking clues from Jarman, Simon Armitage's radio drama is also inspired by flood and isolation. Richard Heslop worked as Jarman's cinematographer and his accompanying film is inspired by Jarman's passion for painting and colour as well as Armitage's script. The music is by another of Derek Jarman's collaborators, Simon Fisher Turner.

Before the play, Jonathan Watts introduces listeners to Derek Jarman's 'first' art form - painting - in which he found a welcome escape. From an early age he delighted in collage and the primacy of paint.
Contributors include Richard Heslop Timothy Hyman, Tacita Dean, Simon Fisher Turner, Richard Salmon and William Fowler.

Carter Mysteries: The Incident of the Russian Visitors

See all clips from The Raft of the Medusa (6)

Simon Armitage was born in West Yorkshire and is Professor of Poetry at the University of Sheffield. A recipient of numerous prizes and awards, he has published 10 collections of poetry, including Selected Poems (2001), Seeing Stars (2010), his acclaimed translation of Sir Gawain and the Green Knight (2007) and more recently The Death of King Arthur (2012). A broadcaster and presenter, he also writes extensively for television and radio, is the author of two novels and the best-selling memoir All Points North. In 2010 he received the CBE for services to poetry.

Richard Heslop graduated in 1984 from St. Martin’s School of Art film department with a BA honours in film/fine art. He became a cameraman on Derek Jarman's arthouse feature film The Garden (1990) and The Last of England. In 1991, he directed Floating for Channel 4, a 39-minute movie about a Docklands bus driver on the verge of a nervous breakdown, who has visions of a second ‘Great Flood’, and finally destroys his house in order to build an ark in his living room. This film was awarded Best Short Film in the Semaine de la Critique at the Cannes Film Festival in 1992. That same year, Richard Heslop joined Oil Factory - a prolific London-based production company for music videos and commercials. Richard has since been writing and developing feature film scripts as well as progressing his work in photography, illustration, video installation and his collection of unique conceptual art pieces.

In 2010 Richard set up I Like Films, Me Ltd with producers Ciska Faulkner and Philip Shotton to produce the feature film Frank. The film was nominated for a BIFA in 2012. He joined long time collaborator and producer Ciska Faulkner at BloodSugar Films in 2014, where he continues to write, develop and direct both short and long format work.

Simon Fisher Turner became Artist In Residence at the ICA in 1980. While working as a driver for a management company in the early 1980s, Fisher Turner met film director Derek Jarman. Although he admits that, initially, he "had to ask people what to do", he composed soundtracks for Caravaggio, The Last Of England, The Garden and Edward II, and finally Blue, Jarman's last feature film before his death. He has also pursued a parallel pop path, recording as the King of Luxembourg for Creation, Él and Cherry Red Records in the 1980s, and latterly under the alias Loveletter.

Watch The Raft of the Medusa 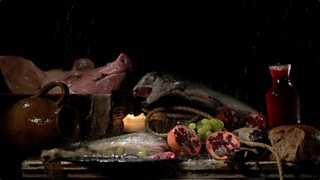 You can watch The Raft of the Medusa here 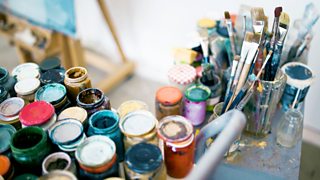 A collection of programmes relating to painting

Dungeness: More Than a Desert

Poet Kate Tempest with a portrait of the Kent Beach where film-maker Derek Jarman lived.