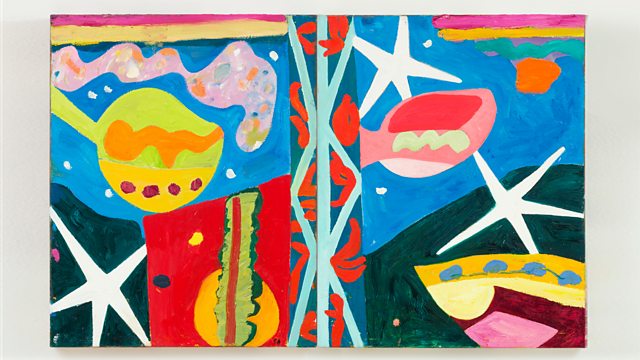 Ray Davies on Sunny Afternoon, the musical about The Kinks, plus artist Gillian Ayres on working into her 80s, Swedish family drama Force Majeure and the return of Game of Thrones.

Songwriter Ray Davies joins John to talk about Sunny Afternoon, his critically acclaimed musical based on the early years of the Kinks, which is enjoying a successful transfer to London's West End and is nominated for five Olivier Awards. Ray Davies discusses how the band's troubled early years and rise to fame are portrayed on stage.

Swedish film Force Majeure won prizes at Cannes and the Guldbagge Awards, as well as being nominated for Best Foreign Language film at the Golden Globes. It follows a Swedish family on holiday in the French Alps, and the rising tensions when a controlled avalanche threatens the family, provoking unexpected reactions. The critic Mark Eccleston reviews.

Game of Thrones has gained cult status among its fans and the fifth series of the fantasy drama is highly anticipated. Historian Dr Janina Ramirez discusses how its creators have drawn on historical events and what makes the series such compelling viewing.

Artist Gillian Ayres, who is now in her mid 80s, talks about a new exhibition of her work, her love of colour and her experiences teaching art to young children in London's bomb ravaged East End during the Blitz.

The Kinks Musical, Sunny Afternoon, is currently on at the Harold Pinter Theatre in London.  Ray Davies has been nominated for Outstanding Achievement in Music at the Olivier Awards this Sunday.

Extended interview with George RR Martin whose epic series of fantasy novels A Song Of Ice And Fire formed the basis for the TV hit Game Of Thrones.