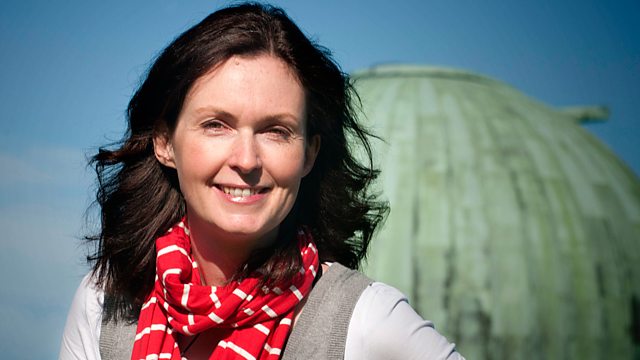 Dr Lucie Green examines the legacy of the Messenger mission to Mercury, which ends this month. Plus how an ion beam has been used to restore lost detail in stained glass windows.

This month sees the end of NASA's MESSENGER mission to Mercury. It's been the first mission to the sun's closest planet since Mariner 10 flew by in the mid-1970s. Lucie Green speaks to geologist Professor Pete Schultz of Brown University about the orbiter's 4 year surveillance and how new observations of this under explored world are shedding light on the planet's mysterious dark cratered surface.

Virtual experiences are coming closer and closer to reality as both sound and vision, and even smell, become convincing. But without the sense of touch you'll never have the full experience. A team at Bristol University has now managed to generate the feeling of pressure projected directly onto your bare, empty hands. Its system enables you to feel invisible interfaces, textures and virtual objects through the use of ultrasound. Roland Pease gets a hands on experience.

One of the biggest challenges in artificial intelligence is conquering a computer's so-called "catastrophic forgetting": as soon as a new skill is learned others get crowded out, which makes artificial computer brains one trick ponies. Jeff Clune of Wyoming University directs the Evolving Artificial Intelligence Lab and has tested the idea that computer brains could evolve to work in the same way as human brains - in a modular fashion. He shows how by doing so, it's possible to learn more and forget less.

And there's a visit to the Ion Beam Centre at University of Surrey where, in conjunction with a project to restore the Rosslyn chapel near Edinburgh, scientists have provided a new development in stained glass conservation - scrutinising the glass contents at the subatomic level using a narrow beam of accelerated charged particles, to literally decode the exquisite features lost to the naked eye. Lucie Green caught up with the Centre's director, Roger Webb.