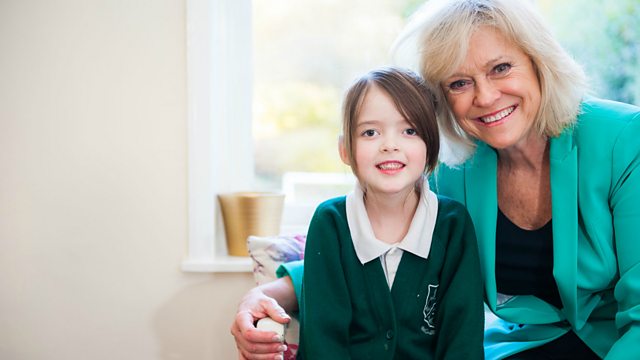 Sue Barker makes an appeal on behalf of Muscular Dystrophy UK, a charity dedicated to improving the lives of people affected by muscular dystrophy.

Sports presenter Sue Barker makes an appeal on behalf of Muscular Dystrophy UK, a charity dedicated to improving the lives of people affected by muscular dystrophy and other muscle-wasting conditions. These genetic conditions affect 70,000 people in the UK and cause muscles to weaken over time, resulting in increasing disability and severe health issues. Sue has been the President of the charity for 11 years.

The appeal features the story of Jonathan Gilmour, who has one of the most severe types of muscular dystrophy. Jonathan needs care around the clock and has to overcome immense physical challenges every day. Few people with his form of muscular dystrophy live beyond their 30th birthday, but 28-year-old Jonathan focuses on making the most of his friendships and academic studies. With the help of Muscular Dystrophy UK, which has advised and supported Jonathan and his family since he was diagnosed, Jonathan is working on a PhD at Cambridge University. Sue also meets seven-year-old Abbi Bennett, who was diagnosed as a toddler. Abbi cannot go up stairs or pick herself up from the floor when she falls down. Her parents know that Abbi's condition will deteriorate over time, and they place their hope in research into future cures and treatments. With funding from Muscular Dystrophy UK, research scientists like Professor Matthew Woods are developing a technique called exon skipping that is showing real promise as a potential treatment.

Donate to this month's Appeal

To find out more about Muscular Dystrophy UK please go to: www.musculardystrophyuk.org

Imagine how you would feel being diagnosed with a condition that you had never heard of. One that your friends, family and colleagues had never heard of either – maybe even your GP. One that is going to change your life completely or even cut it short. Where would you turn?

I am proud to have been President of Muscular Dystrophy UK for the past eleven years. During this time, I have come to understand the daily challenges faced by children, adults, parents and grandparents living with a muscle-wasting condition. This wonderful charity makes sure they do not go through this overwhelming journey alone, offering vital advice and support, as well as opportunities to reach others with the same experiences.

These conditions cause muscles to weaken and waste over time, until people struggle to carry out simple tasks others take for granted, whether it is walking to the front door, climbing the stairs to bed, hugging a parent, or even smiling. For some, their vital breathing muscles or heart will eventually fail them too. The charity is here to support people through emotional and practical challenges, so they can focus on living their lives, not on struggling to get the help they need.

We have no effective treatments or cures for these conditions. Muscular Dystrophy UK has been funding pioneering research for the past 50 years and today, promising potential treatments are being developed. The chance to transform lives is in sight.

Muscular Dystrophy UK is the charity for 70,000 children and adults living with muscle-wasting conditions and their families. It is making a difference today, providing vital information, support and grants to help people live as independently as possible. It is also making a difference for tomorrow, accelerating progress in research and campaigning to make sure people have fast access to cutting-edge treatments.

Muscle-wasting conditions cause muscles to weaken and waste over time, leading to increasingly severe disability. There are many different types of these conditions, which can be inherited or appear out of the blue. Some of them affect thousands of people, while the numbers living with others can be counted on both hands.

People living with the conditions may struggle with the everyday actions others take for granted, from walking and climbing stairs, to blinking and smiling. For some, their heart and vital breathing muscles will weaken, cutting their lives short.

Muscular Dystrophy UK is there to help from the moment a person is diagnosed with a muscle-wasting condition and for every day there after. It works with families to overcome practical and emotional challenges, connects them with vital local support and is working to ensure both children and adults have the right specialist healthcare and equipment, wherever they live.

The charity has funded decades of pioneering research, and now treatments for muscle-wasting conditions could be in sight. It is absolutely vital funding is available for this work to continue. Muscles are irreversibly deteriorating every day.

We know together we can beat muscle-wasting conditions. Your donation will help us to get there.

If you are affected by a muscle-wasting condition please visit http://www.musculardystrophyuk.org or call Muscular Dystrophy UK’s helpline on 0800 652 6352.

Abbi is seven. Her Mum Sarah said, ‘She’s hilarious. She makes us laugh every day. Just in the little things she does or the dance around the room or she’ll burst into song.’

When Abbi was still a baby, her parents suspected something was wrong.

Her Dad Gary said, ‘It was about 6 months that we noticed the difference. She sat up but she didn’t start to crawl, did she? When she was 12 months, she wasn’t standing. She couldn’t pull herself up.’

The following year, Abbi was diagnosed with muscular dystrophy.

Sarah said, ‘It was earthshattering. Finding out your child has got a life limiting condition is probably one of the hardest things that can ever happen.’

As Abbi has grown older she’s become more aware of her condition.

Abbi said, ‘My Muscular Dystrophy means that my muscles are poorly. Drinks for water they’re fine but boxes and stuff not fine with unless it’s just an empty box.’

Conditions like Muscular Dystrophy result in muscles weakening over time. For Abbi, this means she can do less and less for herself as she grows up.

Sarah said, ‘She can’t go up the stairs by herself. She can’t get up from the floor if she falls down. She needs someone to pick her up again. The time we have with Abbi now is absolutely crucial because we don’t know what’s going to happen in the future. When Abbi is having a bad day she’ll say some really heart breaking things. She said to me the other night. I wished a hundred times that I didn’t have muscular dystrophy and my wish never comes true.’

Find out more about Abbi's story and her One in a Million campaign on Facebook here.

Jonathan has one of the most severe types of muscular dystrophy, Duchene, meaning every day he has to overcome huge physical challenges.

Jonathan said, ‘I need support around the clock. I’ve got weaker over time. So things I used to be able to do are impossible or difficult now, and it gets worse. Now I’m on a ventilator. You need to keep on top of the condition to prevent things from escalating before it's too late really.’

Muscular Dystrophy UK has helped Jonathan and his family to stay one step ahead of his condition since his diagnosis.

Jonathan said, ‘They've given me funding for equipment and gave my parents advice on how to adapt our house. The charity is crucial. It’s very, very reassuring to know that you just have to call them up to find out how to cope with problems you’re having. It’s good not to feel on your own.’

Jonathan hasn’t let his condition hold him back and with the help of Muscular Dystrophy UK he has made incredible achievements.

Jonathan said, ‘When I came to university, I got a First in Theology. Without the support of the charity, I don't think I would be here studying a PhD at Cambridge.’

As hard as it is to contemplate, Jonathan is aware that few people with his form of muscular dystrophy live beyond their 30th birthday. Jonathan is 28.

Jonathan said, ‘I don’t think life should be sort of defined by its length really. It’s what you do with it even though it does limit things, that shouldn’t be the main focus. It should be just trying to make the most of now really.’