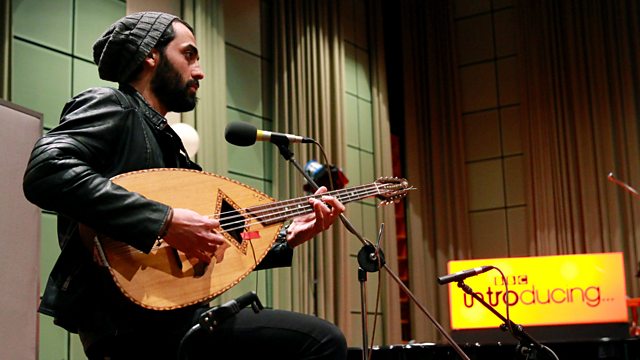 Mary Ann Kennedy presents new music from around the world, plus a session from Maida Vale with BBC Introducing artist Nazim Ziryab, a singer and guitarist originally from Algeria.

Mary Ann Kennedy with new tracks from across the globe, plus a session with BBC Introducing artist Nazim Ziryab, a singer and guitarist originally from Algeria.

World on 3 joined BBC Introducing in January, with the aim of uncovering new talent in world, roots and folk music. Tracks from unsigned artists are now regularly featured in the programme, and this is our first BBC Introducing session. Singer and guitarist Nazim Ziryab uploaded his tracks onto BBC Introducing in January - he had performed in Mali and Morocco as well as his native Algeria before moving to the UK as a student three years ago. Nazim and his band were invited to record this session at the BBC's Maida Vale studios in March. Nazim describes his music as "traditional Berber music fused with Afro-Blues, reggae, Jazz and raw psychedelic sounds that will transport you into the heart of the Sahara." The session will be available as a video on the BBC Introducing website.

Nazim will also introduce a Heritage Track that has influenced him as a musician, and there will be another dip into Radio 3's World Music Archive. Plus, World on 3's Album of the Month.